What You Need to Know Before Buying Caterpillar Stock


Investors and potential investors in Caterpillar (CAT 0.19%) find themselves in an unusual position. There’s no shortage of speculation about the possibility that the global economy will experience a significant slowdown in 2023, and that’s usually bad news for a stock traditionally labeled as “cyclical.”

On the other hand, there’s no guarantee that a severe slowdown is on the way, and plenty of arguments suggest that Caterpillar is well-positioned to thrive in the current environment. Let’s consider its investment thesis from both sides.

With cyclical companies, it’s a good idea to look at their valuations in the context of their revenues, earnings, and cash flow volatility. For example, the chart below (the gray areas show recessionary periods) shows how volatile Caterpillar’s revenue has been. Also, note that its operating margin tends to fluctuate in conjunction with its revenue generation — leading to fluctuating operating profits, which generate volatile free cash flows.

Typically, Caterpillar’s margins expand when its production volume grows. That’s normal in the manufacturing industry because companies can cut their unit production costs as volumes increase and they benefit from scale. 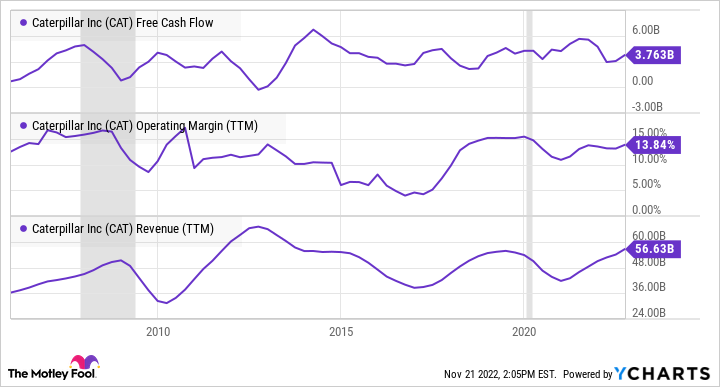 The chart shows free cash flow because that’s what I’ll use for valuation — or rather what Caterpillar calls its “machinery, energy and transportation (ME&T) free cash flow” — a measure that excludes the funds generated by its finance arm, which can distort matters.

For example, at the company’s 2019 and 2022 Investor Day meetings, management outlined a target for ME&T free cash flow of $4 billion to $8 billion through the cycle. If you pencil in a valuation of 20 times free cash flow (a reasonable assumption for a mature industrial company) and take the low and high end of the range, Caterpillar’s valuation range would be $80 billion to $160 billion. Both the high and low figures are unreasonable, though, because they don’t truly reflect the company’s earnings potential. So let’s take the midpoint of the range: $120 billion. And that’s precisely what Caterpillar’s market cap is.

Based on the argument above, readers might conclude that Caterpillar is fairly valued and walk away from the stock. After all, investing in undervalued stocks is undoubtedly more appealing than buying fairly valued stocks.

But the bullish case for the stock argues that there are reasons why earnings and free cash flow could move toward the high end of that $4 billion to $8 billion range on average. 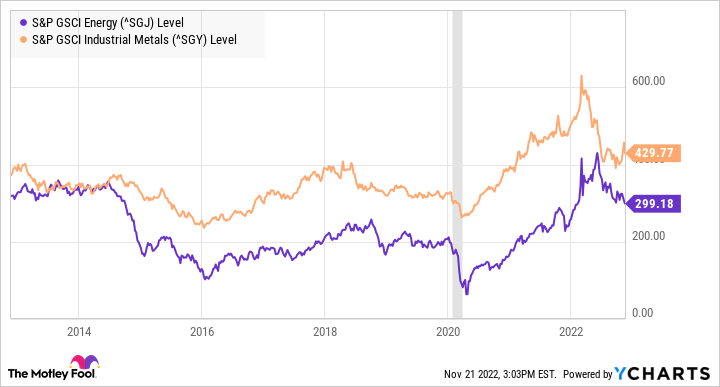 Against this, bears will argue that weakness in the residential market (which accounts for only 25% of Caterpillar’s construction sales, but is often seen as a leading indicator for nonresidential construction spending) could lead to slowing sales growth. Meanwhile, going back to the point about expanding production growth margins, it’s worth noting that the increase in sales in the third quarter was driven more by price ($1.6 billion) and less by volume increases ($1.3 billion).

Indeed, CEO Jim Umpleby acknowledged that point on the most recent earnings call: “In the environment where we are in today, where a relatively larger portion of the sales increase is due to price realization, there’s less operating leverage, making delivering those progressive margins more challenging to achieve,” he said.

Is Caterpillar a buy?

Caterpillar stock will suit investors looking to play a long upcycle in energy and mining commodity-related capital spending, as the outlook for construction spending is uncertain. But if you are not convinced that commodity inflation is here to stay or are looking for a purer way to play the theme, then Caterpillar stock is one for the watch list.

Read More: What You Need to Know Before Buying Caterpillar Stock

$1 Million Bet On OmniAb? Check Out These 3 Penny Stocks Insiders Are Buying By Benzinga