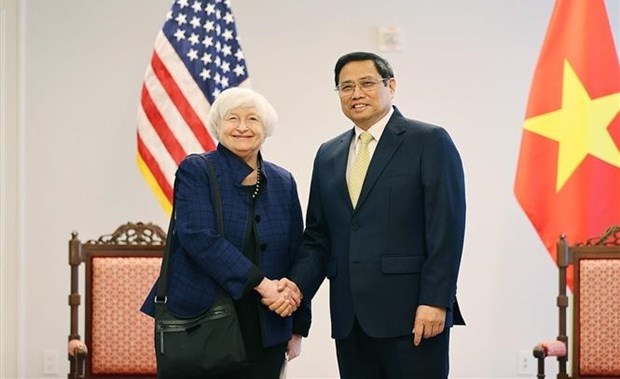 Prime Minister Pham Minh Chinh (right) meets with the US Secretary of the Treasury Janet Yellen on May 11 (US time) during his visit to the country. (Photo: VNA)

Washington D.C. (VNA) — Vietnam expects the US to share its
experience in developing the financial market in a healthy, safe, and
transparent manner, to contribute to national macroeconomic stability, Prime
Minister Pham Minh Chinh told the US Secretary of the Treasury Janet Yellen on May 11 (US time) during his visit to the country.

On the basis of the comprehensive partnership between Vietnam
and the US, cooperation between the two countries in economy, trade, finance
and currency has made positive progress, PM Chinh said at a meeting with
Secretary Yellen while in the US attending the US-ASEAN summit at the
invitation of US President Joe Biden.

He emphasised that Vietnam wishes to build an independent
and self-reliant economy with sustainable development and deep integration,
adding that stabilisation of the macroeconomy plays a very important role.

PM Chinh thanked the US for cooperation and support in
managing and stabilising the foreign exchange market, contributing to Vietnam’s
macro stability.

He also mentioned the complex impacts on economies stemming
from global instabilities such as strategic competition, pandemic, climate
change, conflict and economic development, and armed conflicts.

In response to these issues, he noted, it is necessary to
uphold internationalism and multilateralism with a balanced and just approach.

PM Chinh added that each country needs to build an
independent and self-reliant economy derived from its own internal resources
and strengths. 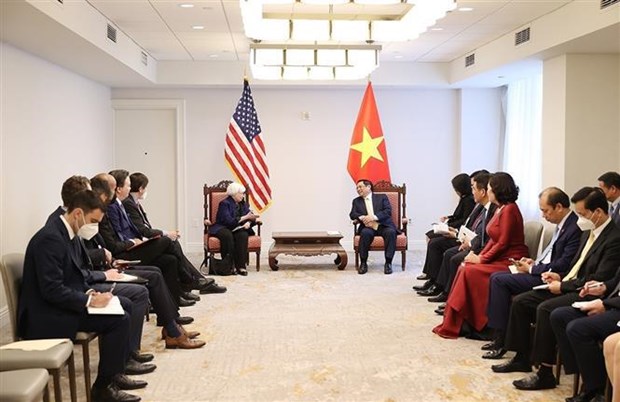 Prime Minister Pham Minh Chinh meets with the US Secretary of the Treasury Janet Yellen on May 11 (US time) during his visit to the country. (Photo: VNA)

The Vietnamese leader proposed that the US Government and
US Department of the Treasury closely support and cooperate with Vietnam in
economic development, handling global challenges, including energy transition,
and fulfilling commitments at COP26.


He also suggested the US side to cooperate with Vietnam to
build regional economic mechanisms, and stabilise trade relations and supply
chains.


US Secretary of the Treasury Yelle affirmed that the US is
willing to deepen economic – trade – investment relations between the two
countries, including cooperation in banking and finance.

She said she highly appreciates Vietnam’s flexible exchange
rate management and its consistency in pursuing the goal of controlling
inflation and stabilising the macro-economy.

Secretary Yelle affirmed that, through global and regional
financial institutions, the US will coordinate with developed countries to
support developing countries, including Vietnam, in the areas of
infrastructure, infectious disease prevention and control, energy transition,
and climate change response.

She added that the US is willing to share experiences and
support Vietnam in capacity building and mechanisms to effectively develop
capital and real estate markets./.