The Invesco S&P500 Equal Weight ETF (NYSEARCA:RSP) is designed to give investors equal weight exposure to each and every company in the S&P500 regardless of their market-caps. That being the case, allocation to the mega-cap stocks are relatively (and significantly) under-emphasized, while allocation to the smaller companies in the S&P500 is relatively over-emphasized. Considering many investors’ portfolios are likely significantly over-weight the mega-cap stocks (whether they know it or not), RSP should be considered as a vehicle to build a more highly diversified portfolio. The fact that RSP has outperformed the S&P500 by 10%+ over the past year is another reason to consider the fund.

As you know, the S&P500 is dominated by a handful of mega-cap technology stocks. This is clearly shown by the top-5 holdings in the S&P 500 ETF (SPY): 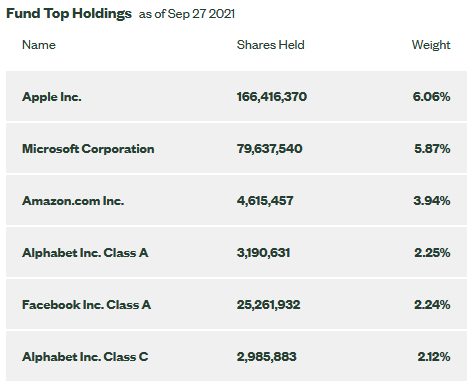 Yes, I realize those are six entries, but note that there are two classes (A & C) of Google stock (err, sorry, Alphabet).

The point is that the top-5 S&P companies alone – in aggregate – equate to ~22.5% of the entire fund. Considering many investors also own stock in one or more of these companies on an individual basis, their portfolios are arguably over-weighted in the mega-cap companies. Now that has been a great place to be over the past few years – no argument there. However, for those investors who would like to broaden out their portfolios and become a bit more diversified, RSP is an excellent way to achieve that goal. The other way, of course, is to buy some of the other ETFs I have been writing about on Seeking Alpha lately. These include funds like the Vanguard’s Value ETF (VOOV), Vanguard Mid-Cap ETF (VO), and Vanguard Small-Cap ETF (VB), for instance.

The RSP strategy is very straight-forward: invest in an equal-weight fashion across all companies in the S&P500. That results in a 100%/500 = 0.2% weight in each company.

But let’s take a closer look at the ETF to see what we can learn.

The top-10 holdings in the Invesco S&P500 Equal Weight ETF are shown below and equate to a very well-diversified 2.42% of the entire portfolio: 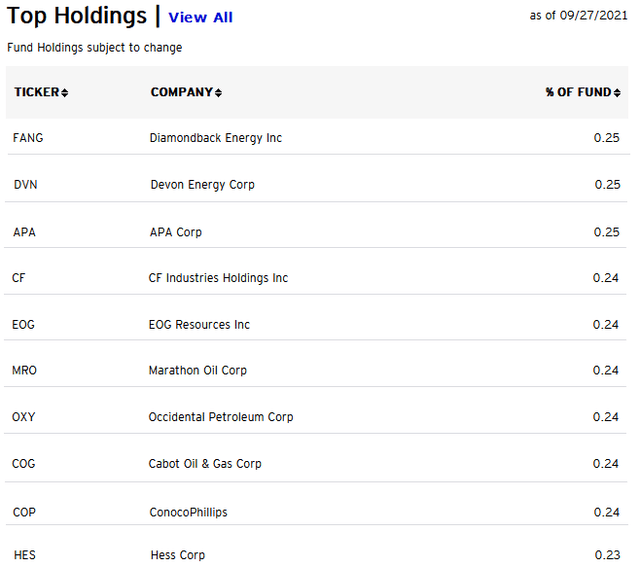 I know what you are thinking: wait, you just said the portfolio would have a 0.2% weight in each stock, right? Yes, of course, but the fact is the RSP portfolio (and the index it tracks) are balanced on a quarterly basis. That being the case, for all practical purposes the 0.2% weight only happens four times a year.

But what the top-10 holdings can tell you is what sectors of the market currently have the best momentum. Right now – that momentum is clearly in the energy industry – specifically, shale oil producers like Diamondback Energy (FANG), EOG Resources (EOG), Occidental Petroleum (OXY), and ConocoPhillips (COP). All of these companies are ripping higher as the price of oil has rallied:

Even long-time laggards and gas-producers Cabot Oil & Gas (COG) and Apache (APA) are participating in the rally due to the big spike in the price of natural gas: 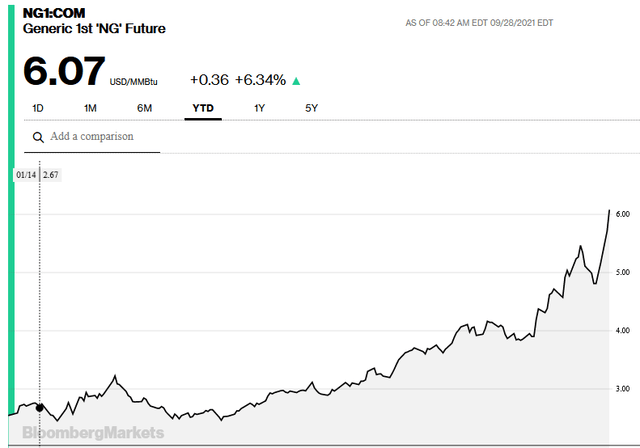 The point here is not so much to highlight the energy sector, but to emphasize the fact that RSP’s broad diversification means it is nicely exposed to whatever sector of the market currently has the momentum:

In the case of energy, since the sector has been out of favor for so many years, note the 4.78% exposure RSP has in energy compares to the energy sector’s 2.69% weight within the S&P500. Note also RSP’s 14.88% allocation to the IT sector is considerably less than the ~40% weighting that technology has in the S&P500. Again, RSP’s equal weight strategy effectively over-emphasizes the losers and under-emphasizes the winners.

But of course there is no sense in diversifying simply for the sake of diversification if that strategy does not, in the long-run, yield strong total returns for the investor. From that standpoint, the last year is evidence that investing in RSP makes a lot of sense: it has significantly outperformed all of the broad major indexes, including the S&P500, Nasdaq-100 ETF (QQQ), and the Dow Jones Industrial Average ETF (DIA):

But before you get too excited, let’s zoom out and look at the performance over the past 5-years:

Here we can see the clear out-performance of the technology sector dominated triple Q’s, and that RSP lagged all of the major indexes. All of this only points to the fact that a well-diversified portfolio is the key to achieving long-term total returns and for reaping what the market wants to give you.

Note that, since inception, RSP has actually out-performed the S&P500:

The following ETF metrics were obtained directly from the Invesco RSP ETF Webpage:

As can be seen by the table, at $29+ billion in assets the RSP ETF is large enough to have no liquidity concerns whatsoever. With a 0.2% expense ratio, the fund is also relatively cost-efficient. The 1.36% yield is actually above that of the current S&P500 yield of 1.28%.

Likewise, the two valuation metrics shown – P/E and price-to-book – are significantly more attractive as compared to those of the S&P500 (34.66x and 4.73x, respectively). Meantime, the 30%+ ROE is strong.

The Invesco S&P500 Equal Weight ETF is a very well-diversified and well-performing fund that can help investors better diversify their portfolios. The valuation metrics of the fund are currently quite attractive in comparison with those of the S&P500 and in my opinion – all things being equal – represents a lower risk alternative to the S&P500 considering the broad market is still trading relatively close to all-time highs.

RSP is a BUY and could be considered as a long-term holding for investors wishing to build a well-diversified portfolio for the long-run.

I’ll end with a 10-year price chart of the RSP ETF:

The stock market is down, but these 4 tech companies prove there’s still good news out

Crypto Prices Slump Over The Weekend