A proposed tax on securities transactions in Thailand will depress trading and harm the development of the Bangkok stock exchange, said Pakorn Peetathawatchai, the market’s president.

Thailand’s government has said it was planning to levy taxes on trading stocks and cryptocurrencies, after the trading and mining of the latter mushroomed in the country’s mostly unregulated environment.

“I think it certainly would impact the market, especially on the liquidity side, because the volume of trade would be affected by the higher transaction costs,” Pakorn said about the proposed 0.1 per cent transaction tax in an interview with the Financial Times.

Thailand proposed the levy as the country has continued to struggle to revive growth, with the tourism sector reeling from the impact of the coronavirus pandemic.

Pakorn said that the Stock Exchange of Thailand had questioned the government about the size of the planned tax, the lead time businesses would be given to comply with it and whether exchange traded funds would be subject to taxation in addition to individual equities.

“Our market has been prosperous for quite some time, and is becoming one of the very meaningful markets in Asia and even in the world,” Pakorn said. “But once this tax comes out, it will be a readjustment again.”

Thailand’s government is also considering imposing a flat 15 per cent withholding tax on all cryptocurrency trades, but it has faced pushback from the nascent industry.

Pakorn said the Bangkok bourse planned to launch a digital assets exchange with the goal of opening trading in the second quarter of the year, pending approval of an operating licence by the country’s Securities and Exchange Commission.

The market, to be called the Thai Digital Asset Exchange, or TDX, would initially trade in investment tokens, which are digital securities for an underlying asset, rather than cryptocurrencies such as bitcoin or ether.

“We would like to provide a shelf for the asset class so that the retail investor can start diversifying his investments in a smaller amount,” Pakorn said.

Thailand’s tourism-reliant economy has been hit hard by the pandemic, straining the public budget.

But cryptocurrency mining and trading have provided a rare source of growth. Thailand now boasts one of south-east Asia’s largest markets for digital currencies, according to CryptoCompare, an aggregator that tracks the market. 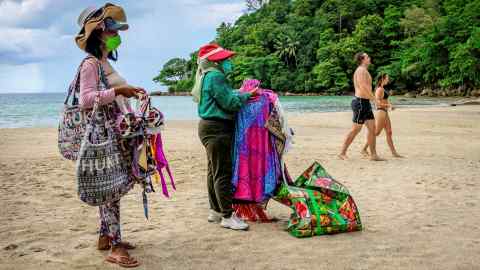 Interest has been driven partly by the depreciation of the Thai baht, which lost 10 per cent of its value against the dollar last year. “This makes the value proposition of crypto more attractive as it protects against a loss of purchasing power from the Thai baht,” said David Moreno Darocas, a research analyst at CryptoCompare.

The surge of activity in the market has caught regulators off guard, but businesses have been quick to move into the sector.

Bitkub Capital Group, Thailand’s largest digital asset exchange, reached a valuation of more than $1bn in 2021 after entering a joint venture in November with SCBx Group, one of the country’s oldest commercial banks. SCB took a 51 per cent stake in the exchange for $537m.

For the latest news and views on fintech from the FT’s network of correspondents around the world, sign up to our weekly newsletter #fintechFT