Should You Buy This Beaten-Down Dividend Aristocrat?


The market has changed directions on investors. Euphoria in early 2021 has turned into a panic after the broader market had one of its roughest starts to a new year on record in 2022. The market doesn’t take many prisoners when overall sentiment is negative, which means that most stocks sell off, including blue-chips.

Investment and financial company T. Rowe Price Group ( TROW -0.04% ) has been among the victims, down nearly 30% since 2022 began just a couple of months ago. The stock is a Dividend Aristocrat and a proven winner. If you’re looking for a steady wealth generator over the long term, here are three reasons to consider T. Rowe Price.

1. Joined at the hip with the markets

T. Rowe Price is one of the world’s largest investment management companies. It creates and sells various investment products, like mutual funds and exchange-traded funds, while also offering wealth management and advisory services. The company holds more than $1.5 trillion in total assets under management and operates globally. 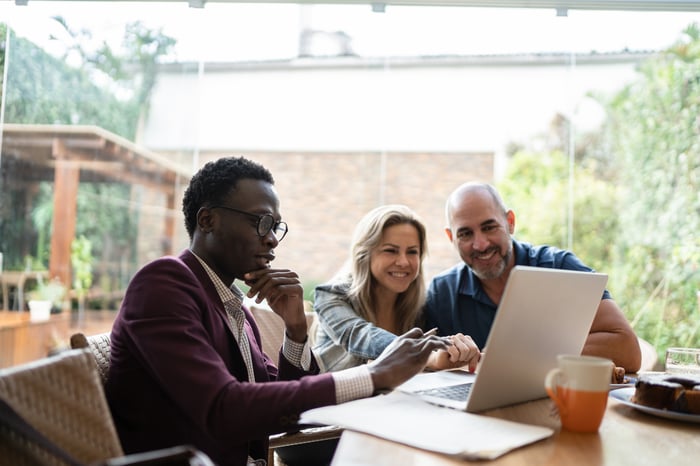 T. Rowe Price looks at its total assets under management (AUM) to gauge how its business is performing. The company’s primary source of revenue is collecting fees on the products held by investors. For example, owning a T. Rowe Price mutual fund will cost you a small percentage called the expense ratio.

Therefore, the more AUM T. Rowe Price has, the more revenue it generates. AUM can increase when people invest new money in T. Rowe Price products and services or when existing AUM appreciates in the market. In other words, T. Rowe Price benefits from the stock market going up, which has historically happened over the long term, even if the occasional correction or bear market creates minor hiccups along the way. 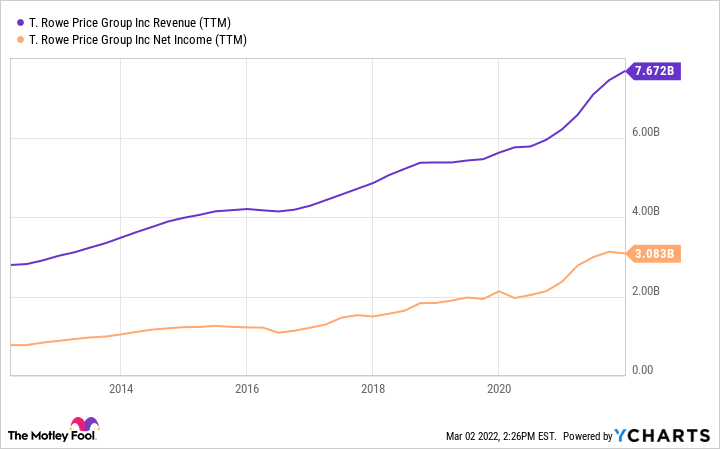 T. Rowe Price has benefited from a market that’s been mostly bullish over the past decade. The company has averaged 11% annual revenue growth during that time. Meanwhile, the company’s net income (profits) has increased an average of 15% per year over the same period.

Dependably putting money in your pocket

T. Rowe Price doesn’t need to spend a lot of money on its business beyond its people, making it very profitable. It turns almost $0.42 of every dollar of revenue into free cash flow, an excellent ratio that gives management a lot of money to throw around.

A lot of it goes back to shareholders in the form of a dividend. T. Rowe Price is a Dividend Aristocrat, which means it’s part of the S&P 500 and has raised its dividend for 25 consecutive years or longer. It’s common to find dividend stocks putting up meager increases to keep their streak of increases alive, but T. Rowe Price is having none of that.

The company’s raised its dividend for the past 35 years, and the average dividend increase over the past decade has been 13%. If that wasn’t enough, management has also issued special dividends to shareholders, or one-time payments. Investors got a $3 dividend in 2021, the equivalent of almost three-quarters worth of payments! The dividend yield is 3.4% today, which I would argue is robust considering the growth you get with it.

The stock’s on sale today

T. Rowe Price has taken a tumble since the calendar turned over to 2022, probably because of the struggles of the broader market and the company’s recent $4.2 billion acquisition of private investment firm Oak Hill Advisors. Sometimes a stock will sell on news of a large purchase because of the potential dilution for existing shareholders and the uncertainty involved, and this $4.2 billion cash and stock deal certainly qualifies as a big move, considering it’s more than 10% of T. Rowe Price’s $32 billion market cap.

The turbulence in the market has also affected T. Rowe Price’s AUM. The company announced that January AUM fell 6.5% from December as investors sold or moved money elsewhere. A reduction in AUM could temporarily hurt revenue, but T. Rowe Price has shown an ability to deal with this for decades. It’s likely that AUM will rebound when there isn’t so much fear in the markets. 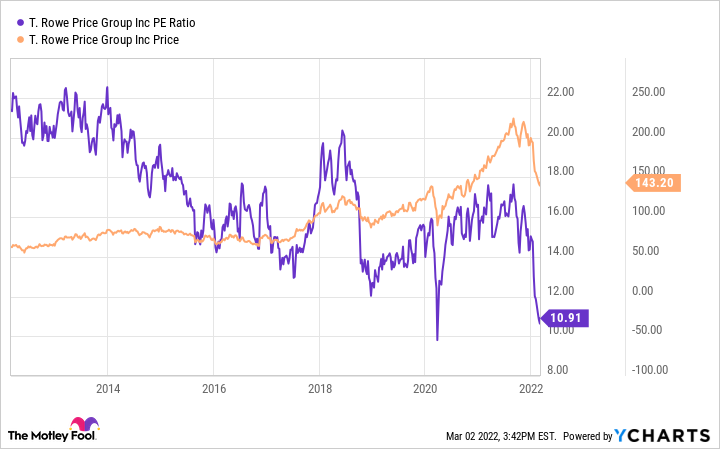 The stock now trades at a price-to-earnings (P/E) ratio of about 11, its lowest valuation of the past decade, except for the COVID crash in 2020. Shares have averaged a P/E between 16 and 17 over the past decade, so the stock is significantly undervalued in that context.

If you’re optimistic about the market as a whole and its long-term track record, it’s hard not to see the current dip in T. Rowe Price as a buying opportunity.


Read More: Should You Buy This Beaten-Down Dividend Aristocrat?

Why Is Tonix Pharmaceuticals (TNXP) Stock Up Today?