Shopify (SHOP 8.52%) was already making waves as an e-commerce enabler before 2020, but it soared to new prominence at the onset of the pandemic when billions of folks were doing their best to avoid shopping in person. The surge in consumer demand for online shopping and the government-mandated closures of brick-and-mortar stores compelled a wave of businesses to establish an online presence. Shopify was there to help and benefited from the trend.

That said, it’s not all good news today for Shopify. Let’s consider both sides of the argument for investing in this stock — the bull vs. bear. 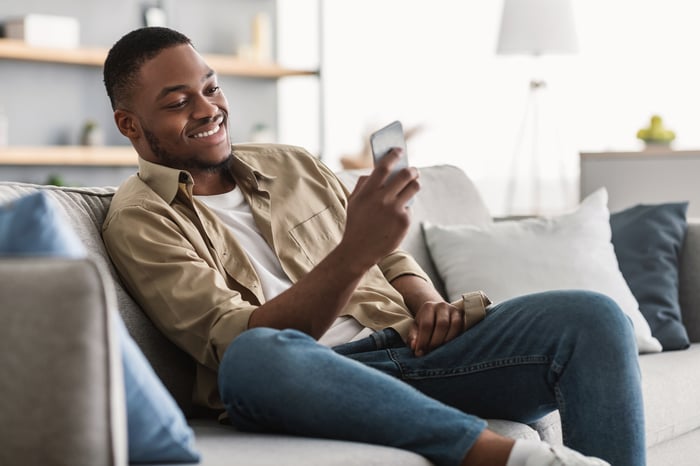 The bull case for investing in Shopify

Those in favor of investing in Shopify will point to the company’s exemplary growth even before the pandemic. Indeed, from 2012 to 2019, Shopify’s sales grew from $24 million to $1.6 billion. That should assuage concerns that it is primarily a pandemic stock. The company provides the tools for businesses of all sizes to start and grow their websites. It typically receives a monthly fee and a percentage of sales those websites generate.

As a result, Shopify has benefited from the secular shift toward shopping online — a trend that still has a long way to go. Even in 2020, at the height of the pandemic, e-commerce sales totaled just 14% of overall sales in the U.S. The market researchers at Statista forecast that will rise to 22% by 2025.

The difference between e-commerce spending and overall spending is an opportunity for Shopify. Of course, not all consumer spending will go online, even in the long run. However, it can be reasonable to assume we’re headed toward a more balanced split between online and in-person shopping. To make the investment case for Shopify more compelling, the stock is down a whopping 79% from its high, and selling at nearly its lowest price-to-sales ratio in the last five years. 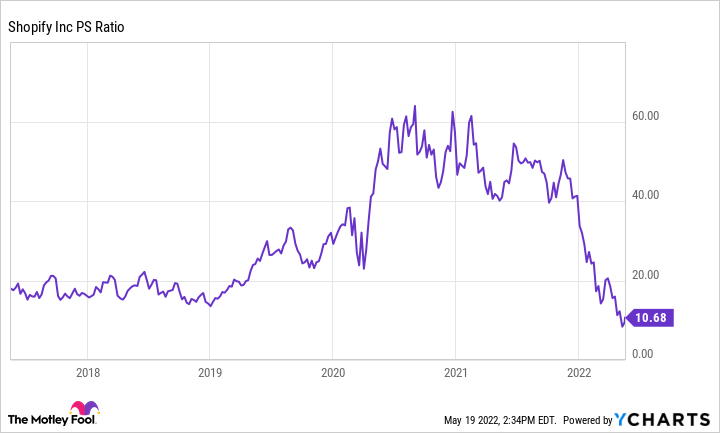 The bear case against Shopify stock

Those arguing against investing in Shopify now may be willing to concede all the wonderful points made above said about the growth of e-commerce. They would probably also agree that Shopify’s revenue growth has been impressive over the years. However, the bears will point out that Shopify’s stock is still expensive even after falling considerably from its peak. 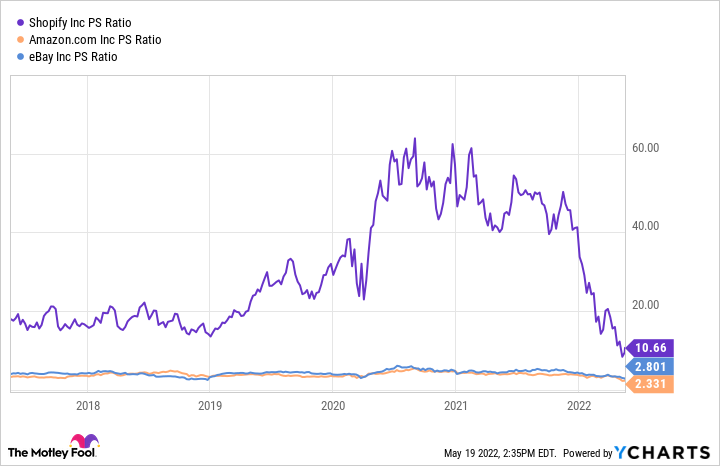 Compare Shopify with its e-commerce rivals, Amazon (AMZN 0.19%) and eBay (EBAY -0.71%), and its premium valuation is prominently highlighted. Sure, you can argue for the competitive advantages Shopify boasts against Amazon and eBay. For instance, out of the three, Shopify is the only one that empowers the individual entrepreneur and builds the merchants’ brand. Amazon and eBay give sellers access to a large buyer audience, but don’t work to build a merchant’s relationship with customers. Those differences highlight that this is not an apples-to-apples comparison but it goes to show the valuation gap between them.

That said, it’s hard to argue that those advantages justify a three to four times valuation premium. After all, merchants have choices as to how they’ll reach consumers online. Not all of them will choose Shopify.

Overall, both the bulls and bears make good points, but I still favor the bull case. Shopify’s impressive growth highlights the growing cohort of businesses that are choosing it over its competitors. Its merchant-empowering business model is likely to continue attracting new clients. Given all that, I would be willing to pay today’s premium to own shares of Shopify.