During the meeting, the countries sign a three-year plan to regulate cooperation and government-to-government dialogue through 2024.

The Joint Committee was established in 2014 as a comprehensive bilateral dialogue framework for senior government officials. The meeting is the fifth time the committee has convened, and the first since 2018.

The meeting is part of a series of events marking 30 years of diplomatic relations between Israel and China.

“The Chinese, like Israelis, aren’t afraid of new ideas,” said Lapid at the meeting’s outset. “There’s a built-in curiosity in the character of our two peoples. Give us a new and exciting idea, and we’ll gather around it, discuss it enthusiastically , and immediately examine its origin and how it can be improved.”

Representatives of a number of Israeli government ministries and offices participated in the meeting, including Science, Technology and Space Minister Orit Farkash-Hacohen and senior officials from the Health, Environmental Protection, Culture, Agriculture, and Economy ministries, as well as the Innovation Authority and Patent Office. 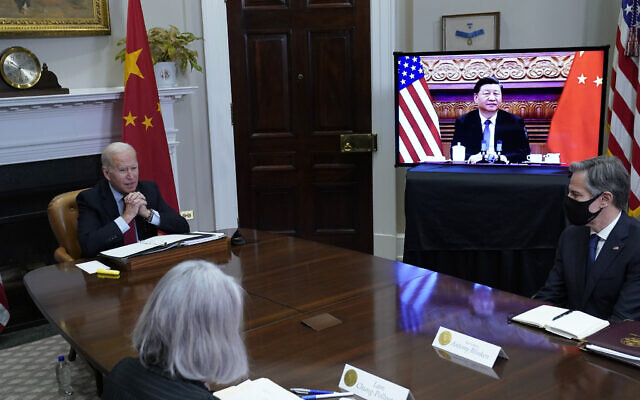 “Israel and China are marking three decades of diplomatic relations characterized by a continuing political dialogue, close economic and trade relations, and diverse collaborations which link the two peoples,” said a statement from the Foreign Ministry spokesman’s office on Monday. “The volume of trade with China has increased significantly over the 30 years of diplomatic relations and today, stands at approximately $18 billion USD. China is one of Israel’s most important trading partners, and the free trade agreement is expected to contribute to increasing trade volume.”

Israel’s initiatives to strengthen ties with Beijing come as the United States, Israel’s closest ally, increasingly sees China as its primary military and economic rival. This reality has forced Jerusalem to seek a balance between its deep commitment toward its alliance with the US, and China’s growing importance as a global economic and military power.

Amid a US-China trade war that has ebbed and flowed in recent years under both the Trump and Biden administrations, China has shown interest in Israeli innovations, especially in medical tech, robotics, food tech, and artificial intelligence.

Washington’s main concerns lie in potential dual-usage technologies, where various technologies would have both civilian and military applications. At the same time, Israel has regulations in place to prevent the sale of sensitive military-related technology to China (and other countries), following a 1990s deal in which Israel had to scrap the sale of advanced airborne radar systems to China amid fierce US opposition.