Brussels has cut its growth forecasts further and lifted its inflation outlook as the energy crisis triggered by Russia’s invasion of Ukraine exacts its toll on the EU economy.

Both the EU and euro area are set to expand by 2.7 per cent this year, well shy of the previous expectation of 4 per cent, forecasts published by the European Commission on Monday showed. Growth is tipped to be 2.3 per cent in 2023.

Inflation is expected to surge above 6 per cent in both the EU and euro area this year, with some central and eastern European countries likely to see double-digit price rises in 2022.

Paolo Gentiloni, the economic commissioner, said in a statement on Monday: “Russia’s invasion of Ukraine is causing untold suffering and destruction, but is also weighing on Europe’s economic recovery.”

He added: “The war has led to a surge in energy prices and further disrupted supply chains, so that inflation is now set to remain higher for longer.”

Energy costs have soared and confidence has faltered in the wake of the invasion of Ukraine. The commissioner also cautioned that other scenarios were possible where “growth may be lower and inflation higher than we are projecting today”.

EU member states have pushed through five rounds of sanctions, and are now in the process of seeking to finalise a package targeting the oil sector. Those measures have yet to be agreed, however, given resistance from EU member states heavily reliant on Russian oil — most notably Hungary.

Energy prices were up 38 per cent year on year in April in the euro area, and food costs by more than 6 per cent in the same period. A separate commission report published on Monday warned of multiple shocks, from supply chain snags to higher commodity prices, that could further hit households’ purchasing power in the coming months.

Inflation is set to fall to 2.7 per cent in 2023. But the figure remains above the European Central Bank’s target of 2 per cent. Last week, ECB president Christine Lagarde signalled that she would support raising the main interest rate in July, paving the way for the first increase for more than a decade. 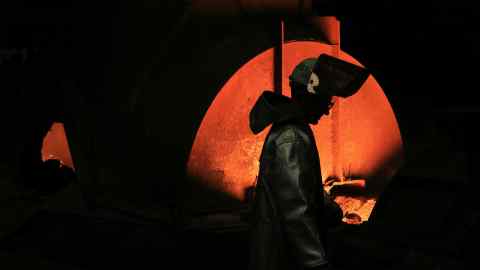 With the threats to growth mounting, some economists want the European Commission to announce another suspension to its deficit and debt rules next year.

Despite the harsh outlook, the commission still expects unemployment to carry on falling following the surge induced by Covid-19. The jobless rate will drop from 7.7 per cent last year to 7.3 per cent in 2022 in the euro area, according to the draft forecasts, before slipping further to 7 per cent in 2023.

Budget balances are also expected to gradually improve. The overall euro area budget gap is predicted to drop from 5.1 per cent of GDP last year to 3.7 per cent this year and 2.5 per cent in 2023.

After 32 years, McDonald’s Plans to Sell Its Russia Business

Debt ceiling: We’ve seen this drama before. Here’s how it ends

CPI Checks Most of Powell’s Boxes. Now What?