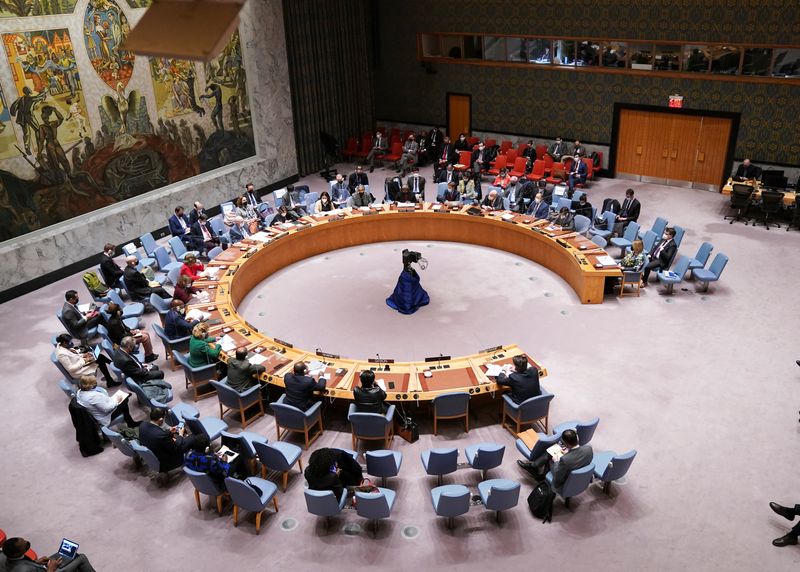 By Andrew Osborn and Polina Nikolskaya

He spoke as the West took more measures to try to discourage Russian from going on the offensive in Ukraine, with Germany putting the brakes on a new gas pipeline and Britain hitting Russian banks with sanctions.

“Every indication is that Russia is continuing to plan for a full-scale attack of Ukraine,” Stoltenberg told a news conference in Brussels. “We continue to call on Russia to step back … it’s never too late not to attack.

Russia’s parliament approved treaties with the two regions a day after Russian President Vladimir Putin said he was recognising the independence of the two enclaves in eastern Ukraine, which adjoin Russia and have been controlled by Russian-backed fighters since 2014.

Putin said the territory covered the entire Donetsk and Luhansk regions of eastern Ukraine, not merely the parts currently controlled by separatists. The move appeared to increase the likelihood of conflict.

He also signed a decree on deploying Russian forces there, and on Tuesday Russia’s upper house of parliament formally granted his request to use troops abroad with immediate effect.

A deputy defence minister asked the chamber to deploy troops in Donbass – an umbrella term for the two regions..

The prospect of a disruption to energy supplies and fears of war – stoked by reports of shelling in some areas and movements of unmarked tanks overnight in the rebel-controlled city of Donetsk – rattled international financial markets and sent oil prices surging to their highest level since 2014.

In Donetsk, some residents celebrated, with cars flying Russian flags and sounding their horns. But several blasts were heard in the city on Tuesday, and some people questioned whether Putin’s moves would bring peace.

Germany is Russia’s biggest customer for , and the decision by Chancellor Olaf Scholz to freeze the Nord Stream 2 pipeline – built but awaiting approval – was widely seen as one of the strongest measures Europe could take.

Scholz said he had asked his economy ministry to take steps to ensure that certification could not take place for now.

The Kremlin regretted Germany’s move and said it hoped the delay was temporary. Putin said Russia “aims to continue uninterrupted supplies” of energy to the world.

British Prime Minister Boris Johnson and French President Emmanuel Macron meanwhile agreed on Tuesday to continue to work together to target those who supported what Johnson called Putin’s “aggressive approach”.

“Russia’s actions don’t just threaten Ukraine’s sovereignty, but are a blatant attack on freedom and democracy, the leaders agreed,” a joint statement said.

Russian parliamentary approval of friendship treaties with the two breakaway regions could pave the way for Moscow to establish military bases there.

U.S. President Joe Biden signed an executive order to halt U.S. business activity in them and further, potentially severe new U.S. sanctions and export controls were set to be announced on Tuesday.[L1N2UX085]

Britain’s Johnson also said it was “inconceivable” that the European Champions League soccer final could go ahead in Russia as scheduled in May.

Germany convened a call of foreign ministers from the Group of Seven industrialised nations, in which they agreed to condemn Russia’s actions, according to Japan’s foreign minister.

The United States initially limited itself to measures directly related to the separatist regions, apparently preferring to keep a larger sanctions package against Russia itself in reserve.

Russia’s recognition of the separatist areas, and Putin’s authorisation of what he described as peacekeeping troops there, still stops far short of the massed large-scale invasion that Western countries have said they fear Moscow is planning. It leaves Western leaders trying to guess Putin’s intentions for up to 190,000 troops deployed around Ukraine’s borders.

But Western countries saw ominous signs in Putin’s rambling televised address on Monday, in which he characterised the Ukrainian leadership as illegitimate and the Ukrainian state as artificial.

Ukrainians consider such descriptions offensive and false. Kyiv is older than Moscow and, while parts of today’s Ukraine were captured by Russian tsars, other parts were not ruled by Moscow until World War Two.

Kristina Kvien, the top U.S. diplomat in Ukraine, said Putin’s “outrageous statements … were delusional, reflecting a warped vision reminiscent, not of a global leader, but of Europe’s worst authoritarians”.

President Volodymr Zelenskiy said Ukraine may sever diplomatic ties with Russia and urged allies not to wait for a further escalation to enact sanctions.

The West, which imposed sanctions on Russia after it annexed Crimea from Ukraine in 2014, appears likely to hold back on its toughest sanctions for now.

EU sanctions could include putting hundreds of politicians and officials on blacklists, a ban on trading in Russian state bonds or an import and export ban on separatist entities, EU diplomats and officials said.

“Our European, American, British colleagues will not stop and will not calm down until they have exhausted all their possibilities for the so-called punishment of Russia,” he said.

The Russian-backed separatists in Donetsk and Luhansk broke away from Ukrainian government control in 2014 and proclaimed themselves independent “people’s republics” after a pro-Moscow Ukrainian president was ousted in Kyiv.

“I know that the blood I spilled with my comrades and our labours and efforts and the losses of civilians were not in vain all this time,” Dmitry, a former member of a pro-Russian militia, said in Donetsk on Tuesday.

(Refiles to insert dropped word ‘was’ in first paragraph)