In this month’s article, I will outline why I will maintain my 100% allocation to the SPDR S&P 500 ETF (SPY) in October. First, let me review my pension plan performance in September. The market, as measured by the S&P 500 index, lost 4.76%. As for my pension plan assets, I slightly outperformed the index by only losing 4.66% for the month. Unfortunately, I lost money for the month so my investment objective of preserving my capital was not met. I did meet my second investment objective which is beating the S&P 500 index. Table 1 below shows my returns and allocations for the month of September and Table 2 below shows my returns for the past 12 months.

I have made changes to Table 2 below after I received a comment from a reader. Table 2 shows new columns to better (more accurately) reflect my investment results. The third column, $100K Hypo, is what my returns would be if I started my account with $100,000 in my first article of this series and followed the allocation recommendations from my articles. The fifth column, $100K SPY, shows the returns of just investing $100,000 and keeping it all allocated to SPY. The percentage returns in the last row show that my strategy returned just under 34% for the last 12 months and simply investing in SPY would have returned just over 31% for the last 12 months. Therefore, I have outperformed SPY for the last 12 months by almost 3.00%. 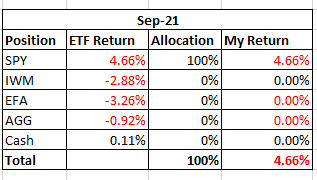 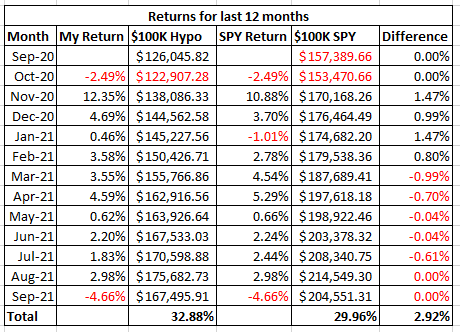 To review the purpose of this series of articles, my retirement account only allows me to buy the following four ETFs: iShares Core U.S. Aggregate Bond ETF (AGG), SPDR S&P 500 ETF, iShares Russell 2000 ETF (IWM), and iShares MSCI EAFE ETF (EFA). I can also have my money in cash. The question is how to decide where and when to allocate money to these various ETFs.

You can see that the moving average crossover system provided some excellent long-term buy and sell signals that would have allowed investors to capture long-duration moves in the index while avoiding costly drawdowns. Avoiding these costly drawdowns allows me to meet the objective of capital reservation.

I employ this strategy because I do not want to experience a large drawdown with my pension assets. During the 2008-2009 market crash many people didn’t even look at their retirement statements because they were afraid of what they would find. I submit that if those people would have used a market strategy similar to what I outline in this series of articles, they would have been able to avoid much of the decline during the bear market and consequently would have had less emotional stress during that time period.

Chart 2 shows that SPY reversed course and lost 4.66% in September. SPY showed a monthly bearish engulfing candle on higher volume. Not exactly an inspiring development if you are bullish on SPY. A bearish engulfing candle is when the range of this month’s candle is above the high of the previous month’s candle and then the price closes below the low of the previous month’s candle. Its range engulfs the previous candle. While that is a bearish development for sure, SPY remains in bullish alignment. No one likes to take a loss of 4.66% in a month, but maybe SPY deserved a breather. Previous to this month, SPY was up seven months in a row. This chart is still bullish to me which is why I will maintain my 100% allocation to SPY in October. The trend remains up and I intend to follow the trend.

Chart 3 shows that IWM lost 2.88% in September. It again tested the red ten-month moving average and it bounced off of the EMA. The chart remains in bullish alignment. IWM remains inside the green box in the upper right-hand corner of the chart which shows that IWM has been range bound since February 2021. We are still waiting to see if this trading range is a sign of distribution which occurs before the index rolls over or if this is just a pause to allow the index to digest its recent gains before the index continues moving higher. We will have to wait and see.

Chart 4 shows that the IWM:SPY ratio gained ground in September by closing 1.87% higher. The ratio does trade below the two moving averages causing the ratio to be in bearish alignment. It will be interesting to see if the ratio re-tests the 2020 lows or if it can stay above that level and form a higher low. That is to be determined at this time. I will need the ratio to close above the red ten-month moving average before I consider allocating money to IWM.

EFA declined 3.26% on higher volume which is bearish. Another bearish sign is the red engulfing candle for the month. At one point in September, EFA reached new highs. Unfortunately, EFA couldn’t maintain that level, and instead, it closed below the low of the August candle resulting in a bearish engulfing candle. The good news is that Chart 5 shows that EFA remains in bullish alignment. The overall trend for EFA is up.

EFA outperformed SPY in September by 1.47% as shown in Chart 6. The ratio remains in bearish alignment. As stated before, I need to see this ratio close above the red 10-month moving average before I allocate money to EFA over SPY.

Chart 7 shows that EFA slightly underperformed IWM in September by 0.39%. The ratio was rejected at the 10 month EMA two months ago. The ratio has managed to stay above the blue six-month EMA which is positive if you are a bull. The ratio remains in bearish alignment. You can see some evidence of a potential change in the trend, however. The blue six-month moving average is starting to trend higher. I have been writing that there is no reason to invest in EFA over IWM until this ratio at least closes above the red 10-month moving average. It’s possible that scenario can happen in October as we enter the seasonally favorable time period for equities. We will have to wait and see. I will continue to watch this chart to see how events unfold.

AGG lost 0.92% in September joining the other ETFs that declined in August. So, both bonds and equities lost money in September. AGG also closed below the red 10-month moving average. As mentioned many times before, crosses below that key moving average often precede bear market moves.

Chart 9 shows that while AGG did lose money in September, AGG did outperform SPY by almost 4%. The AGG:SPY ratio, however, remains in bearish alignment. As I have mentioned numerous times, I am still waiting for the ratio to close above the red 10-month moving average line before I consider allocating money to AGG.

In summary, all of the ETFs I follow for my retirement account declined in September. As could be expected, AGG was the least damaged by the market decline as it is a more conservative ETF. Despite having the worst loss of the ETFs I follow, I contend that SPY remains the best place to put my money. SPY remains in bullish alignment. Over the last several months it has performed better than the other ETFs mentioned in this article. I will maintain my 100% allocation to SPY due to its dominant performance compared to AGG, EFA, and IWM. The SPY trend is still bullish, so I will continue to follow the trend.