Hopefully, readers will appreciate your insights. I appreciate the fact that Sam follows me (I just found that out today after deciding to post the above Tweet thread).

Anyone who follows me has to know that I am not a fan of crypos, including Bitcoin.

But I especially went after the obvious fraud pretenders including LUNA and DOGECOIN, the latter hyped by Elon Musk.

Perhaps Sam feels the same way that I do and have commented on many times. “I follow lots of people on Twitter I disagree with and learn more for them than I do with people echoing my thoughts.”

Hopefully, the above Tweet thread by Callahan sheds a lot of light on what is happening in the crypto space. 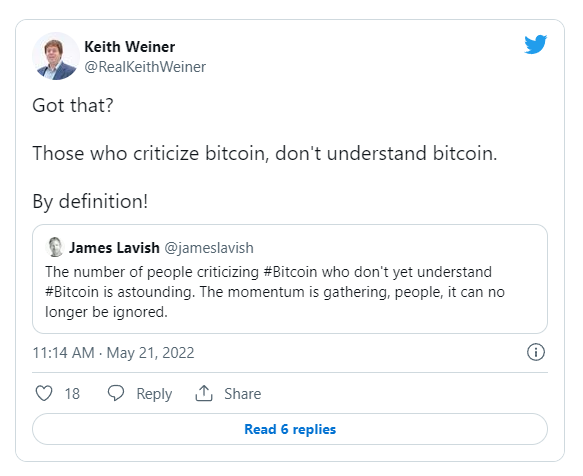 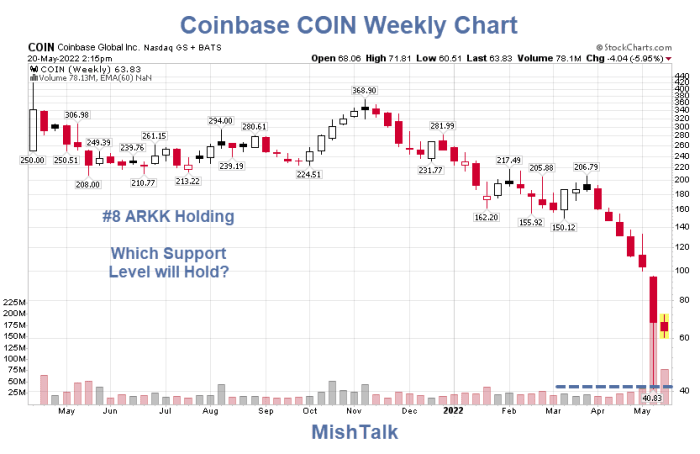 Coinbase is the 8th largest position of Cathie Wood’s ARK fund. Will Coinbase even survive?

Where is Bitcoin Headed?

I have frequented commented “I do not know and nor does anyone else.” The same applies Ethereum and all the rest of the coins.

Anyone who got in on the “Musk high” is down 88% with almost no chance of recovery in my estimation. 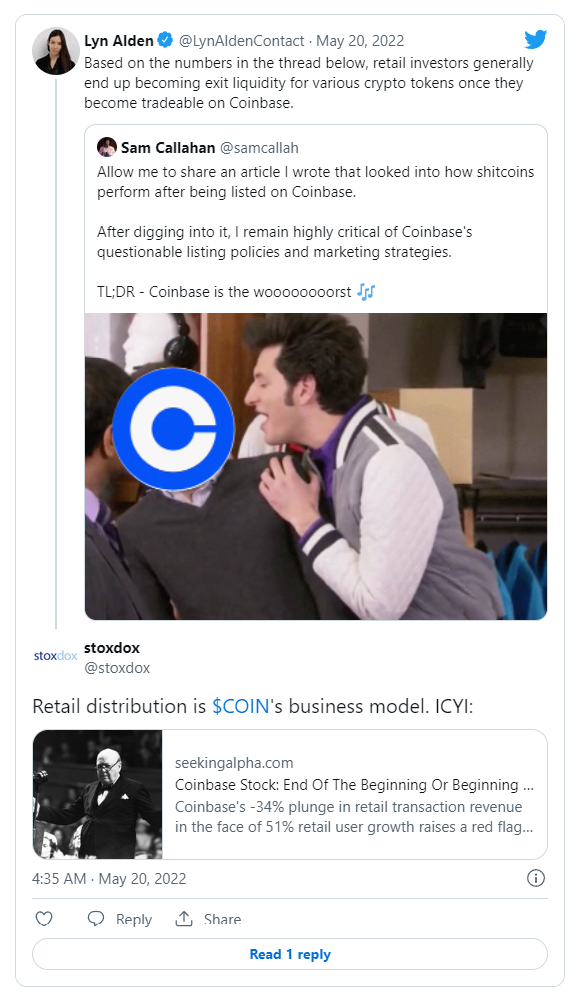 Retail Distribution is the Coinbase Model

A Word About the Future 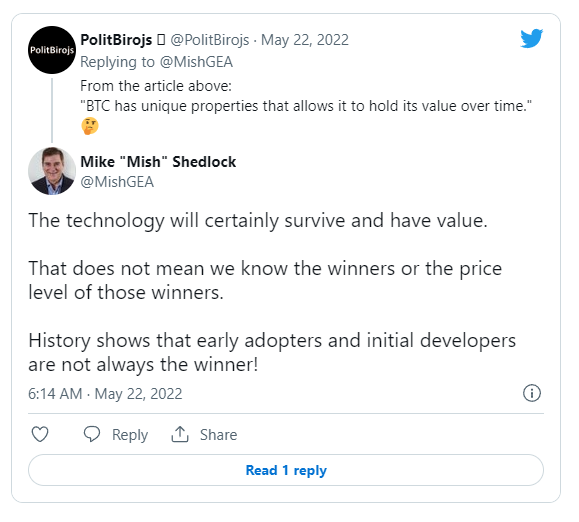 Pretending to Know the Unknowable

No one knows where these coins are headed or in what timeframe. Yet, every day people pretend to.

The subject came up again today. 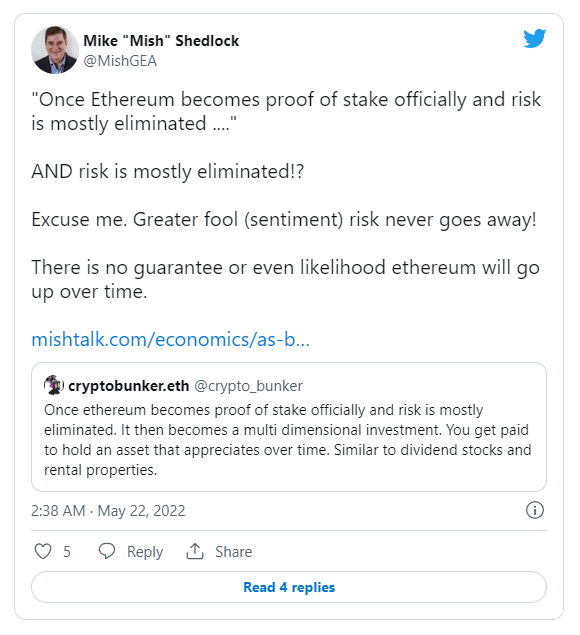 “Once Ethereum becomes proof of stake officially and risk is mostly eliminated ….“

AND risk is mostly eliminated!?

Sorry, that’s either ignorance or a lie. I see similar statements about Bitcoin all the time.

Bitcoin launched in January of 2009. It has never seen any environment than endless Fed pumping, low interest rates, and extreme QE liquidity supporting all asset prices.

Liquidity also explains the rise of hundreds if not thousands of altcoins, all inherently worthless.

Even if we give Bitcoin and Ethereum first mover advantage, no one can possibly know how either will perform in an inflationary environment in which the Fed is hiking and for the first time stating an aggressive QT (Quantitative Tightening) policy.

Contrary to popular myth, the supply of Bitcoins does not decrease when it halves,

A Bitcoin halving is when the payout for mining a new block is halved. This happens after every 210,000 blocks (approximately four years).

Halving limits the increase in the number of Bitcoins over time, but that does not decrease the supply. Instead, halving decreases the rate of increase of supply.

The supply of Bitcoin is every coin ever mined minus those with lost keys.

Every second of every day interested parties have to address a simple set of questions.

It’s important to understand there is nothing unique about Bitcoin.

The same applies to the stock market, the bond market, currency traders, even home owners.

Do I want to hold this asset or something else?

If someone is willing to sell you a Bitcoin for $30,000, ask yourself why. What is it that they think they know that you think they don’t.

Are the sellers “Bitcoin Whales” deciding to cash out? Newbie greater fools who has had enough?

I don’t know, and you don’t either. Yet, the pretending goes on: “Bitcoin always will rise.”

Anyone who makes that statement is a liar, a fool, or a charlatan hoping you are their greater fool.

Even in inflationary environments, cash is not trash.

The clear winner this year is cash. It will generally buy more of generally any risk asset even if it buys less food or gasoline.

A Word About Asset Bubbles and Inflation 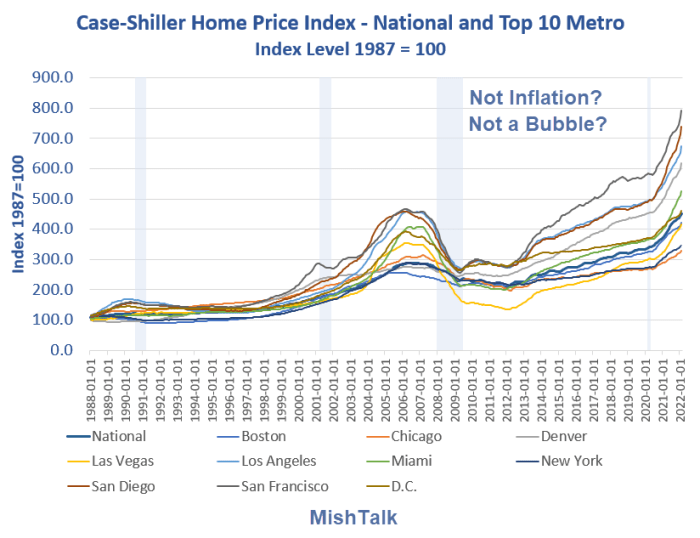 The Fed has no idea what inflation is or how to measure it. Neither the Fed nor economists in general put assets in their model.

If that chart is not a measure of inflation then what is it? A tuna fish sandwich?

But if inflationary bubbles are the upside beneficiaries of Fed policy, the downside risk is a deflationary bust.

We are in asset bubble deflation now.

Top Idea of the Month: What Needs to Happen Before Stocks Bottom?

Please consider Top Idea of the Month: What Needs to Happen Before Stocks Bottom?

Crypto advocates certainly understand the inner workings of cryptos far better than me.

But most of them are naïve about supply and demand, bear market liquidity, the true driving force behind cryptos (speculation), and what they believe they know that is simply unknowable.

On May 12, I discussed Bitcoin Margin Calls, Waterfall Events, and People Pretending to Know the Unknowable

On May 14, I noted El Salvador’s bonds Sell for 40 Cents on the Dollar, What About Bitcoin City?

El Salvador has models. President Nayib Bukele tried to sell bonds backed by Bitcoin but there were no takers. But he is buying the coins.

Curiously, Saylor blew up his company once before and now smack in the midst of a liquidity crunch may do so again.

Not to worry, I am told “It cannot happen” by charlatans pretending to know the unknowable.