Much has been written about the attractions of buying low-cost passive index funds. Active fund managers (Warren Buffett, in his 2013 letter to shareholders), index fund managers (John Bogle, Founder of the Vanguard Group), and academics (Jeremy Siegel, Professor at the Wharton School and author of Stocks for the Long Run) have all encouraged investors who have limited time or expertise to buy and hold a broad diversified index like the S&P 500. This is effectively a long-term play on the vitality of the American economy, which Buffett advised investors in his 2020 letter to shareholders to “never, ever bet against”.

Figure 1: Percentage of fund managers underperforming their benchmarks over the last 10 years

For those who subscribe to the advice of Messrs. Buffett, Bogle, and Siegel, the SPDR S&P 500 Trust ETF (SPY) (informally called Spyders) is an efficient way to get exposure to the S&P 500 due to its exceedingly low (0.09%) fees, although taxes on dividends is one of the factors that may cause total returns to be slightly lower.

The S&P 500 is on the cusp of another all-time high (figure 2), so this is not the time for cash-flushed investors to throw caution to the wind, back up the truck, and load up on the index. A dollar cost averaging and long-term hold strategy seems far more prudent. Furthermore, as most 401(k) plans offer participants a low-cost S&P 500 index alternatives (e.g., the Fidelity Spartan 500 Index Fund, Vanguard 500 Index Fund, Schwab S&P 500 Index Fund, among others), this strategy can potentially work equally well for those who made the commitment to set aside a fixed amount from their monthly paychecks to fund their retirement plans.

But how has this dollar cost averaging strategy performed over past market cycles, and how much volatility (i.e., drawdowns or unrealized losses) would an investor have to endure through severe market downturns?

I decided to do some back-testing to find out.

What is dollar cost averaging?

According to Wikipedia, dollar cost averaging is an investment strategy that aims to reduce the impact of volatility on large purchases of financial assets such as equities.

Suppose an investor has $100,000 to deploy. The investor could attempt to invest the entire amount in one lump sum by timing the market, but the investor’s returns would be highly dependent on the market level at the point in time the investment was made.

Alternatively, the investor can mitigate market timing risk by deploying the $100,000 in equal amounts into the market at regular intervals (for example, $1,667 every month, for a total of $20,000 each year, over 5 years).

[dollar cost averaging] seeks to reduce the risk of incurring a substantial loss resulting from investing the entire lump sum just before a fall in the market. Dollar cost averaging is not always the most profitable way to invest a large sum, but it is alleged to minimize downside risk.”

The technique is said to work in markets undergoing temporary declines because it exposes only part of the total sum to the decline. The technique is so called because of its potential for reducing the average cost of shares bought. As the number of shares that can be bought for a fixed amount of money varies inversely with their price, dollar cost averaging effectively leads to more shares being purchased when their price is low and fewer when they are expensive. As a result, dollar cost averaging can possibly lower the total average cost per share of the investment, giving the investor a lower overall cost for the shares purchased over time.”

Back testing the strategy

I ran a model to calculate both the value of the portfolio and the maximum drawdown of a hypothetical investor who deployed $100,000 in equal monthly amounts over 5 years beginning in January 2007. I then ran two additional sensitivity analyses: one using different start dates of deployment and a second one by varying the amount of capital deployed each month. 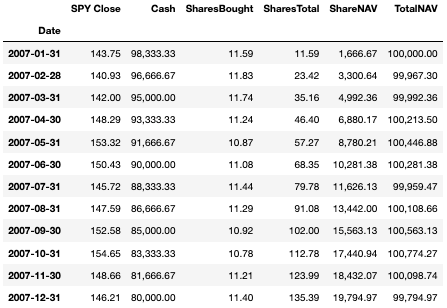 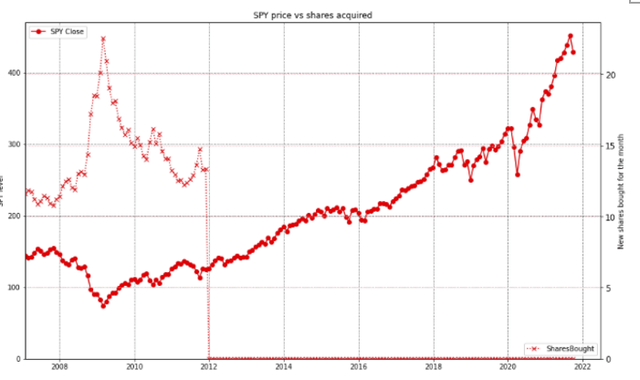 Before I proceed further, two points of note: (1) the SPY shares pay dividends (currently yielding ~1.3%), but I assumed the investor would need the money for expenses so I did not factor them into the calculations; and (2) after 2012, the cash balance drops to zero, so the value of Spyder shares (blue line) is the equal to the total value of the portfolio (green line).

To a risk averse investor, two metrics are relevant:

Maximum drawdown: During the sharp market decline during the global financial crisis, the total value of the portfolio fell to a low of $82,310 in February 2009 (trough of green line in 2009), representing a maximum drawdown or unrealized loss of $17,690 or -17.7%. The value subsequently recovered and appreciated to the $360,000 at the end of October 2021, but this is the case only for investors that had the discipline and intestinal fortitude to stay the course and continued investing $1,667 in Spyders at the end of each month until the cash balance reached zero. 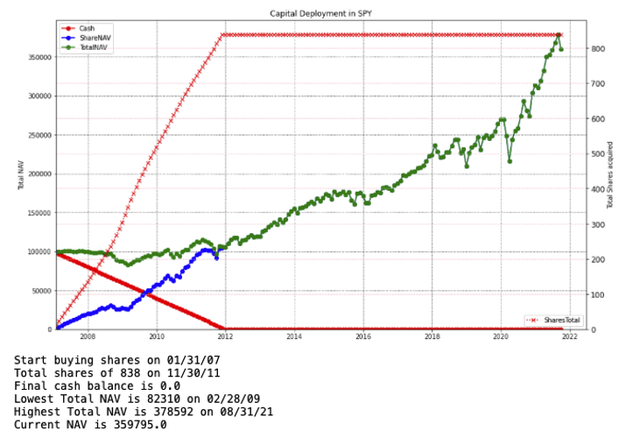 The combined value of the SPY shares and cash and the maximum paper loss are highly dependent on the starting date and pace of capital deployment.

If the investor had deployed the entire amount in one lump sum on January 30, 2007, the total appreciation would have been 3.0x (figure 6, line 2), 0.6x less upside than the dollar cost averaging strategy (line 1), and the maximum drawdown of -48.6% would have been far higher than the dollar cost averaging strategy’s maximum drawdown of -17.7%.

If the investor were able to pick out the March 31, 2009 market trough and deploy all the capital that day (which I argue would be just about impossible to do), the portfolio would have appreciated to 5.8x by September 30, 2021 with no drawdown (line 3). Conversely, if the investor were unlucky enough to deploy the entire amount in one lump sum on October 31, 2007-the pre-global financial crisis market peak-the portfolio would have appreciated by 2.8x, but the maximum drawdown would have been a gut wrenching -52.2% at the March 31, 2009 market trough (line 4).

Figure 6: Comparison of returns and maximum drawdown for different strategies

To find out how the start date of a dollar cost averaging strategy can affect returns and maximum drawdown the strategy, I ran a backtest using start dates for every month since January 2007. Figure 7 shows, for each start date of deployment (represented on the x-axis), the highest NAV achieved and the NAV as of September 30, 2021 (solid red and solid blue lines, left y-axis), and the maximum drawdown (dotted red line, right y-axis).

A few interesting and noteworthy observations: 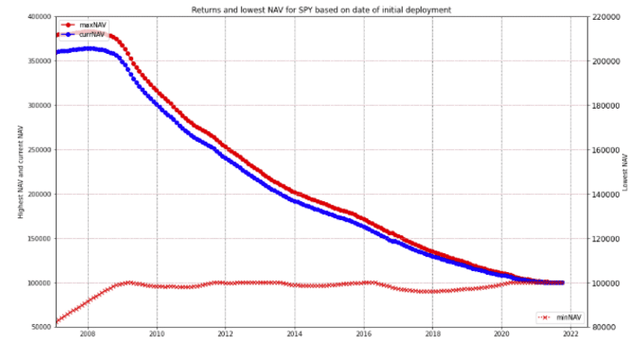 Sensitivity analyses on amount of capital deployed each month

To determine if there is any benefit to deploying more capital in a down month and less capital in an up month, I ran a backtest scenario in which the investor would invest $2,500 in a month (1.5x the $1,667) if the S&P 500 closes below the previous month’s level, and $833 (half the $1,667) if it closes above the previous month’s level. As expected, there is more variability in the numbers of share purchased each month under this scenario (figure 8, dotted red line).

Figure 8: Shares acquired each month depending on the S&P 500 level from previous month 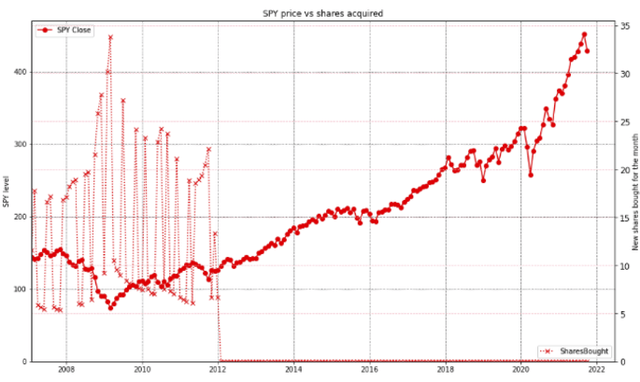 Figure 9: Comparison of returns between stable and variable deployment pace 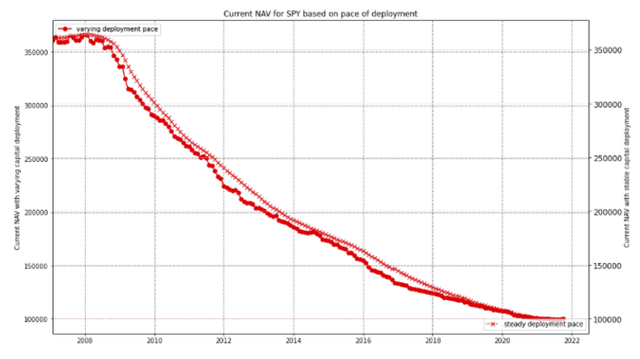 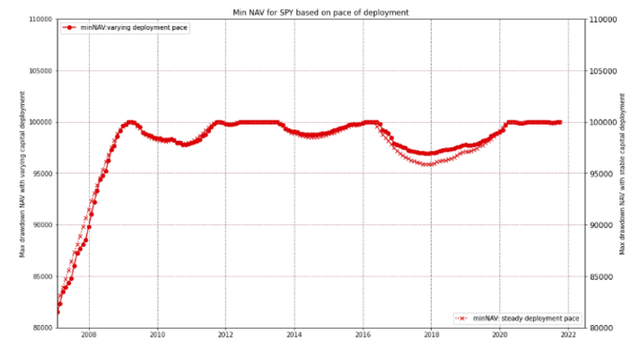 A major concern is a market that goes sideways for the 5 years while the capital is being deployed, but then drops sharply after all the capital has been deployed. Under this scenario, the investor would not have had the opportunity to enjoy unrealized gains or cost average down before the sharp drop, nor would the investor have the capital to buy more shares at the depressed valuations. Mitigating factor: The S&P 500 has not exhibited the behavior of going sideways for 5 years over the last several decades, so this is hopefully a low probability event.

The use of a long-term dollar cost averaging strategy to invest in Spyders may not be the most profitable way to invest if one were absolutely certain that the market is on an up-trend. However, for those of us who lack the prescience, the strategy improves our odds of a satisfactory outcome while potentially dampening gut-wrenching drawdowns.

My key learnings from the book, Thinking in Bets by Annie Duke, a world leading poker player and decision science author, is that we need to make the best possible decision in the face of incomplete information. Unfortunately, we can still get a bad result in the short run in spite of having the best quality decision because we got “unlucky” (as Seattle Seahawks Coach Pete Carroll did in the closing seconds of Super Bowl XLIX in 2015). However, if it remains the best strategy we have, we should resist the temptation to jump ship just because a few hands didn’t turn out well in the short run, and be prepared to stay the course for the long haul.

LIVE MARKETS Nasdaq 100 futures: On the plus side