Equity markets remain on high alert after Wednesday’s CPI shock. The market had moderately positioned itself for a slightly better than hoped-for number. Instead, we got a worse than expected number, and off we went to the sell-side again. Fear and panic were evident everywhere. The US 2-year yield spiked a massive 30 basis points on the SPI release, and the dollar went on a charge. Equities naturally suffered.

Again as is the trend, it was technology and the Nasdaq that were the big losers on Wednesday. For once it was not total industry-wide selling, and some sectors finished in the green. Defensive sectors like energy (XLE), utilities (XLU) and materials (XLM) all finished the day positively. This was witnessed in the market breadth indicator with 62% of stocks closing lower. This is a noted improvement from 90% on Tuesday.

However, things remain firmly bearish this morning with all US futures markets pointing sharply lower and European indices also lower. We have had some distinctly hawkish commentary from the Bank of England, and the ECB now is on the interest rate hiking warpath. Despite this, bond yields have fallen back. Most likely bond markets are now pricing in a recession and a subsequent lowering of rate hike predictions. That is also why the yield curve flattened somewhat on Wednesday. The front-end yields rose as the Fed will still have to hike quickly, but the back end (far dated) sees a recession ahead and rates cooling in 2023.

Neither is a great outcome for stocks. Higher rates in the short term followed by a recession are not exactly music to equity investors’ ears. Earnings season was pretty strong, but already forward earnings are looking likely to come under increasing pressure based on conference calls after said earnings reports.

We are now slightly less sure of where we go from here. We did issue our sub-$400 call last week, and now that we have reached our target, it is time for a reassessment. The SPY is entering a slightly larger volume zone, which should give it some support. For those Fibonacci fans among you, we are coming up on one of the more significant retracement levels, the 38.2% pullback. From the pandemic’s March 2020 low to the January 4, 2022 high, this 38.2% retracement is at $379.80. Added to this are the Relative Strength Index (RSI) and the Money Flow Index (MFI) both showing the SPY as oversold. Does this mean it is time to rally? Our only caveat is the number of people looking for this imminent rally. Markets generally do prefer to surprise us, so we may get some more torrid days before everyone is flushed out or fed up. Then we can rally. 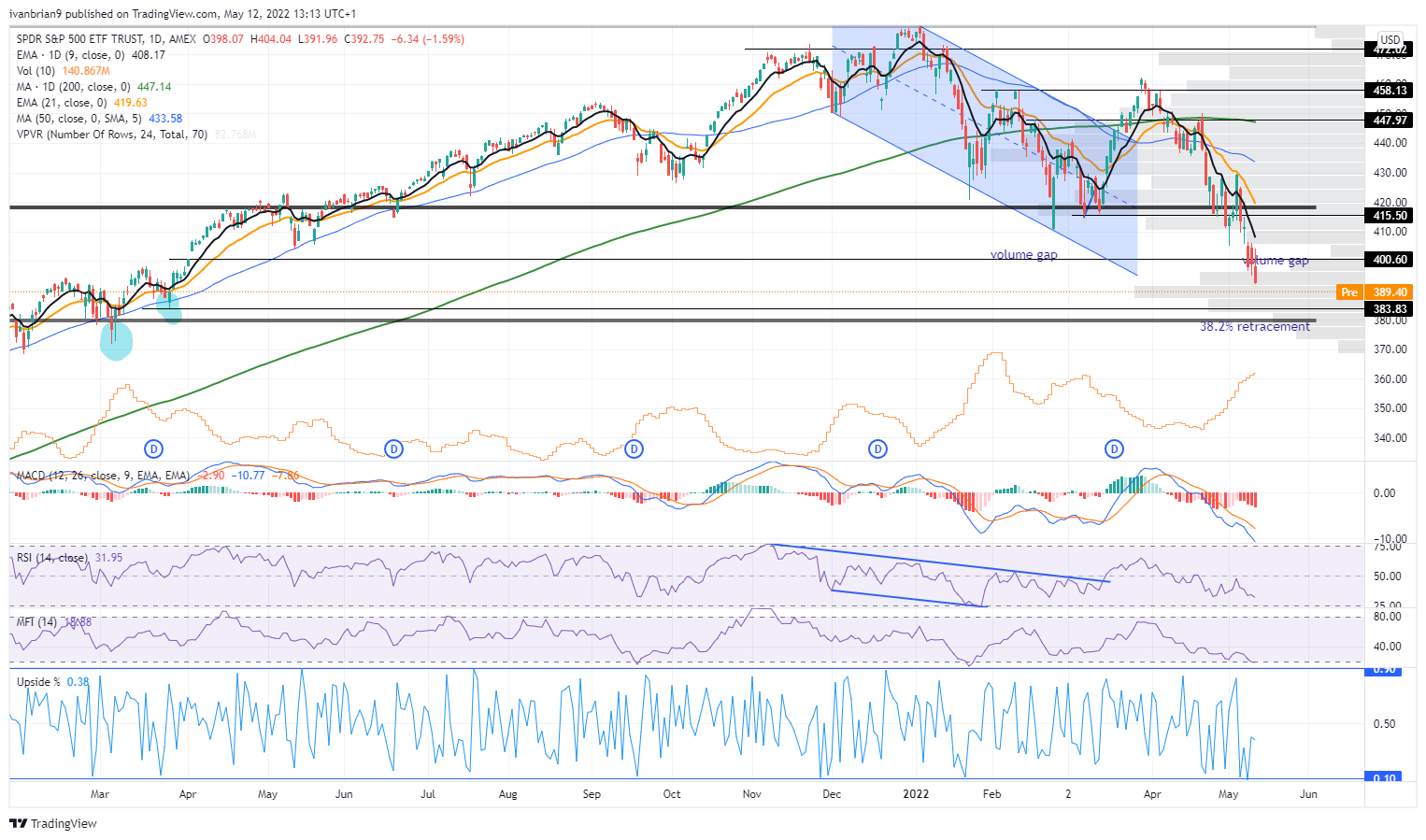 Like this article? Help us with some feedback by answering this survey:

Read More: Just when you thought it was safe to go back in the water