Iron stocks may not get a lot of attention among investors these days, but iron mining and processing is still a huge industry. After all, iron is a primary ingredient in steel, a key component of much of the world’s infrastructure, including apartment buildings, office towers, bridges and tunnels, as well as machines such as cars, washing machines, and even cargo ships.

With commodity prices booming because of supply chain shortages and other challenges from the COVID-19 pandemic, you may be wondering if now is a good time to buy iron stocks. Keep reading below to learn more about iron mining stocks and which ones to invest in today. 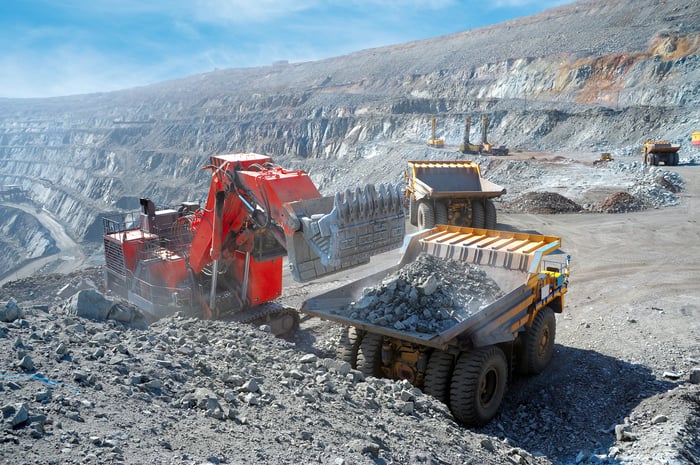 Most iron mining companies are not pure-play iron stocks. They mine other industrial metals such as copper, and many have downstream operations, including smelting and even steel production. With that in mind, let’s take a look at some of the metal stocks that play a role in the iron stock market.

If large and diverse is what you’re looking for from your iron stocks, you can’t beat BHP Group. With operations in steel-making commodities such as iron and metallurgical coal and high-tech base metals such as copper and nickel, BHP has a lot of growth levers to pull.

In fiscal 2021, it produced 253.3 million tons of iron ore used for infrastructure and manufacturing, making it one of the biggest global iron ore producers. The company says it’s the lowest-cost major iron ore company in the world, giving it a competitive advantage since it can earn a wider margin than its peers. Like most materials companies, BHP benefited from a surge in commodity prices during the pandemic as revenue jumped 42% in fiscal 2021 to $60.8 billion, and net income surged 42% to $11.3 billion. BHP’s dividend fluctuates according to performance, but the stock currently offers a generous 10.1% yield. That’s likely to fall if commodities prices decline.

Like BHP, Rio Tinto is a large, diverse company that focuses exclusively on mining metals and minerals such as diamonds. Iron ore made up almost two-thirds of the company’s $63.5 billion in sales in 2021, driving a 42% overall increase in revenue.

In iron ore, volume fell slightly from 333.4 million tons to 319.7 million tons, but iron revenue rose from $27.5 billion to $39.6 billion, thanks to higher prices for the key steel input. Underlying EBITDA in the segment jumped almost 50% to $27.6 billion, showing how profitable those operations are (at least before backing out depreciation, which tends to be an expensive line item for mining companies).

Current management is focused on recovering from the 2020 scandal when it blasted a 4,000-year-old aboriginal site in Australia, but business performance has helped the stock. Rio Tinto is also an attractive dividend stock, offering a dividend yield of 11.2%.

If you’re looking for a pure-play iron mining stock, Vale is about the best you’re going to do. In 2021, 85% of its revenue came from ferrous minerals or iron-based metals, most of which was iron ore. Copper and nickel made up most of the remainder of its revenue.

Similar to its peers, Vale benefited from rising commodity prices, with revenue increasing 38% to $54.5 billion in 2021. Operating income more than doubled from the previous year to $27.7 billion as gross margin surged due to higher commodity prices.

Vale has sharpened its focus on safety after its Brumadinho dam in Brazil collapsed in 2019, killing 270 people. The disaster led to financial, legal, and reputational damage for Vale, and senior managers in charge of the dam were arrested.  As a result, the company is decommissioning 30 dams and aiming for zero high-risk injuries by 2025.

Like the other large miners, Vale is also a dividend powerhouse and currently offers a yield of 13.6%.

Anglo American is a diversified miner with four business segments: diamonds; base metals, including copper and nickel; platinum and related metals; and bulk metals such as iron ore.

In 2021, bulk metals was its most profitable segment, with $8.1 billion in EBITDA out of a total of $20.6 billion. It also got a strong tailwind from rising commodity prices. EBITDA more than doubled last year, with almost all of the increase, or $10.2 billion, coming from rising prices.

Anglo American also rewarded investors with two special dividends last year, returning $5.2 billion to shareholders in dividends. The stock currently offers a dividend yield of 6.5%. The company plans to open the Quellaveco copper mine in Peru this year, which is expected to produce more than 400,000 tons of copper annually after it ramps up and generate another $3.6 billion in annual revenue at current prices. The mine will be powered by renewable energy, helping the company to accomplish its goal of reducing its carbon footprint.

Based in Luxembourg, ArcelorMittal is the largest steel producer in Europe and one of the largest in the world. Last year, it produced 69.1 million tons of steel and 50.9 million tons of iron ore. Although production actually fell in 2021 due to the sale of its U.S. operations, revenue jumped 44% to $76.6 billion, thanks to rising prices.

As a market leader in steel, the company has a number of competitive advantages. In automotive steel, it has production facilities around the world, giving it a proximity advantage in supplying nearby manufacturers since transporting these materials can be expensive. Unlike most steel manufacturers, ArcelorMittal is vertically integrated with its own iron mining operations, and the company believes it can use those materials more efficiently than its peers since it has more control over them. Vertical integration also helps with procurement and lowering logistics costs, and Arcelor Mittal can focus its mining operations on iron that is highly valued for steel.

With the help of higher prices, ArcelorMittal finished 2021 with almost $15.6 billion in net income, or a roughly 20% margin, making it well-positioned to invest in growth and return capital to shareholders.

Cleveland-Cliffs is the largest flat-rolled steel producer in North America and manufacturer of iron ore pellets. Like ArcelorMittal, the company is vertically integrated from raw materials mining to steelmaking and end-product processes such as stamping and tubing. It’s also the largest steel supplier to the North American auto industry.

The company mined 27 million tons of iron ore last year, which is significantly less than other companies on this list. That’s partially because iron mining is concentrated in other parts of the world such as Australia and South America, and Cleveland-Cliffs only mines in Michigan and Minnesota. Prices for hot-rolled coil steel jumped 174% last year to an average of $1,573 per ton, which drove a boom in the stock. It also acquired ArcelorMittal USA at the end of 2020, which helped revenue to almost quadruple last year to $20.4 billion. In addition, it reported $3 billion in net income after a modest loss in 2020. The deal with ArcelorMittal should favor both companies since it essentially gives Cleveland-Cliffs the North American market and allows ArcelorMittal to focus on the rest of the world. Unlike its peers, Cleveland-Cliffs does not pay a dividend.

Should you buy iron stocks?

Iron’s role in the global economy is unlikely to be diminished given the essential nature of steel in industries such as construction and manufacturing. Meanwhile, demand for infrastructure, appliances, and vehicles only appears likely to grow. However, as a commodity, the price of iron can fluctuate broadly in response to market forces, and increasing volume won’t necessarily mean increasing profits.

With iron trading at elevated prices today, almost all of these stocks look dirt cheap on a price-to-earnings basis, but that could change in the future, especially if the global economy sinks into a recession. At the very least, prices should moderate as supply chains eventually unwind.

The good news is that these stocks have benefited from the commodity boom to buff up their balance sheets and reward investors with generous dividends. If you’re an dividend investor or a fan of value stocks, iron stocks could be a good choice for you, but be aware that the sector is sensitive to commodity prices and is likely to suffer in a recession.