The upcoming Goods and Services Tax (GST) hike has been met with resistance not just from the public but also in Parliament recently.

In a lengthy Facebook post on Saturday (26 Nov), ex-CEO of Temasek Ho Ching shared her thoughts on the matter. 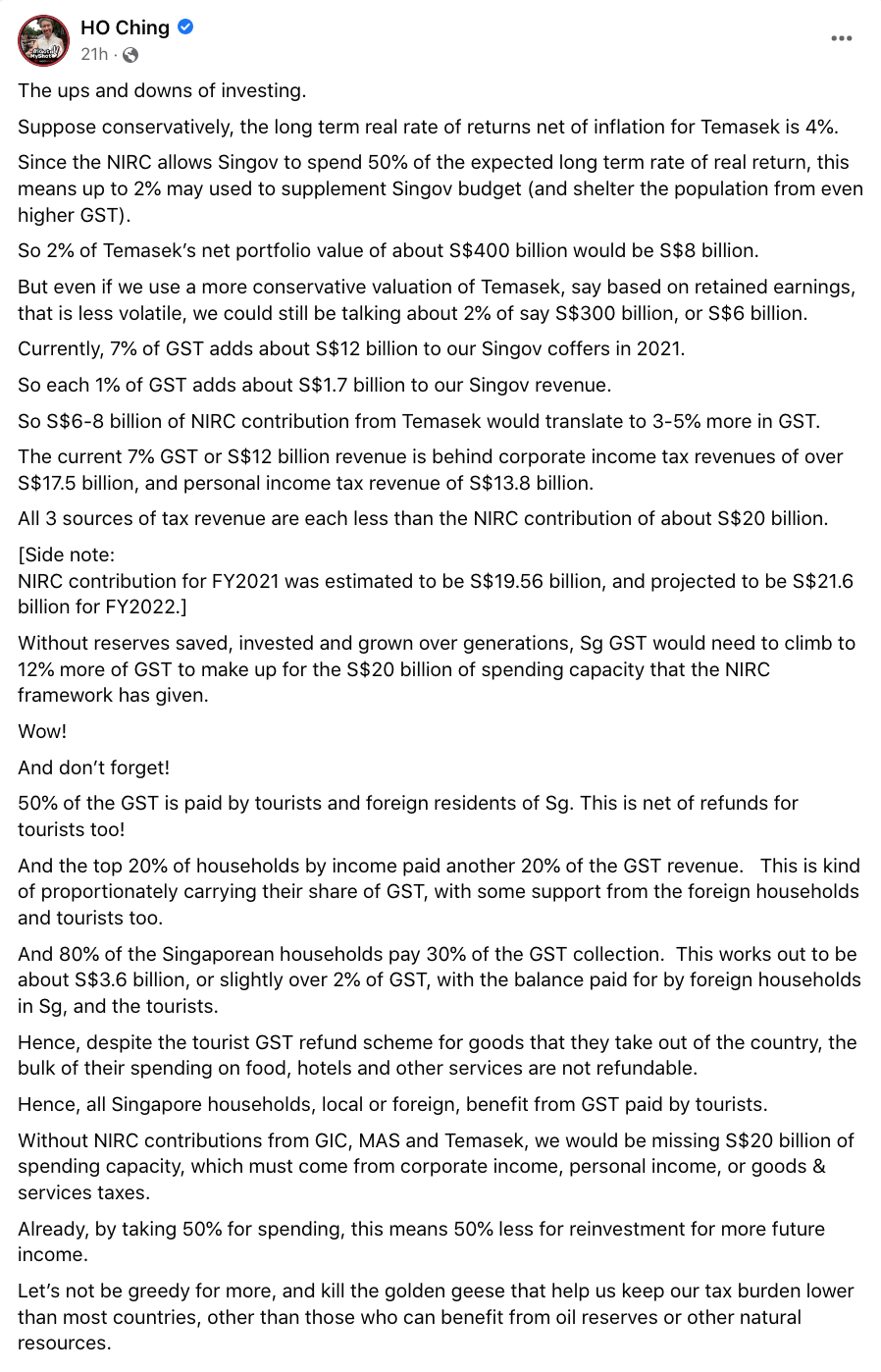 With a series of calculations, Madam Ho illustrates how investing has helped grow Singapore’s reserves and keep Singapore’s tax burden lower than most countries.

Madam Ho, who is now the chairman of Temasek Trust, noted that if Singapore had no reserves “saved, invested and grown over generations,” the GST would need to rise to 12% to make up for S$20 billion in spending capacity given by the Net Investment Returns Contribution (NIRC) framework.

This is because investment returns help bolster our country’s reserves.

The NIRC is how the investment returns of our reserves supplement the annual Budget. The NIRC is estimated to be S$21.6 billion in FY2022, or 20% of our budget.

According to the Ministry of Finance, NIRC comprises of:

To illustrate her point, Madam Ho used conservative estimates to show that the NIRC contribution from Temasek alone equates to about S$6 billion to S$8 billion.

This is assuming that Temasek has a long-term real rate of return net of inflation of 4%.

From another perspective, Madam Ho even opted for a more conservative valuation of Temasek’s portfolio in her example. If the portfolio had a S$300 billion value, the returns would still be about S$6 billion.

Temasek’s portfolio stands at S$403 billion as of 31 March.

In comparison, the 7% of GST collected contributes to about S$12 billion.

This would mean that to match Temasek’s contributions of S$6 billion to S$8 billion, the government would have to collect 3% to 5% more in GST.

GST would climb higher without investments

Madam Ho also pointed out that the current 7% GST generates S$12 billion in revenue for the country’s reserves in 2021. This sum is behind corporate income tax revenues (over S$17.5 billion) and personal income tax revenue (S$13.8 billion).

In sum, all three sources of tax revenue are each less than the total NIRC contribution of about S$20 billion.

Without NIRC contributions from GIC, MAS, and Temasek, Madam Ho said, “We would be missing S$20 billion of spending capacity, which must come from corporate income, personal income, or goods & services taxes.”

As it stands, the 50% of NIRC used for spending already takes away from reinvestment for more future income, she said.

Madam Ho then poignantly ends her post by saying,

Let’s not be greedy for more, and kill the golden geese that help us keep our tax burden lower than most countries.

Debates about GST hike in parliament

Madam Ho’s post was likely a response to the recent debates in parliament over the upcoming GST hike.

Back on 7 Nov, Worker’s Party MPs argued and voted against the hike. Instead, they proposed raising the proportion of NIRC spending in the budget from 50% to 60%.

Both these moves would mean drawing more from reserves.

In response, Senior Minister of State for Finance and Transport Chee Hong Tat said if earlier generations had done this, Singapore will have less reserves and NIRC today.

This would also mean Singapore will currently be facing a greater GST increase to 11% or 13% to fund current and future spending needs, he said.

Have news you must share? Get in touch with us via email at news@mustsharenews.com.