Artificial intelligence (AI)-powered lending-platform Upstart (UPST -56.42%) tells a good story. When a consumer wants to borrow money from a bank or credit union, the process of approving that loan can be time-consuming and complicated. A lender may require a wide variety of documentation, and phone calls or emails requesting clarification will slow things down further.

Upstart partners with lenders looking to reduce the time and costs associated with extending loans. Using its AI models, Upstart instantly approves around three-quarters of the loans it processes. For borrowers, quicker approvals are paired with lower interest rates that are justified by Upstart’s models.

Upstart’s revenue more than tripled in 2021, and the company generated impressive profit margins. The growth story was a hit with investors, and the stock soared throughout 2021 to peak just above $400 per share. The company was worth more than $30 billion at one point. 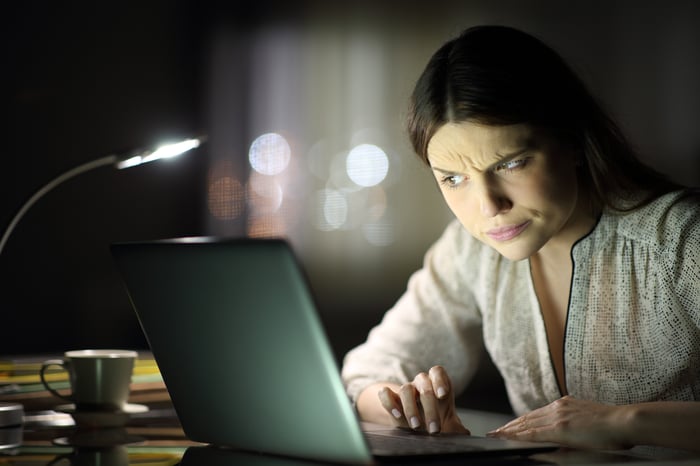 The map isn’t the territory

Upstart had been crashing along with many other growth stocks well before its first-quarter report on Monday. But that decline was sent into overdrive when Upstart’s story began to unravel.

Upstart generally only holds loans on its balance sheet related to products that it’s developing. That makes sense. The company needs data to train its AI models, and different types of loans require different models.

But that changed in the first quarter. Here’s CFO Sanjay Datta on the earnings call:

[H]istorically, our balance sheet has been almost exclusively for the purpose of R&D [research and development]. We have used our balance sheet in the last quarter to do what I call sort of a market-clearing mechanism. And by that, what I mean is when interest rates in the economy change quite quickly, I think it would be fair to say that our platform, its ability to react to the new market-clearing price, it’s probably not as nimble as we would like.

Here’s how I interpret this: The AI-powered models, the very core of Upstart’s business and growth story, weren’t working correctly or, at the very least, they weren’t being trusted by funding partners. Upstart had to put loans it would normally pass off onto its own balance sheet. That’s not how this is supposed to work.

When you use any kind of model, AI-powered or not, you must understand the conditions under which that model is expected to provide a reasonable representation of reality. Upstart’s models are going to be pretty good at determining credit risk when the economic environment isn’t far off from the data those models were trained on.

But the economy can be weird. Things can happen that have never happened before — like right now. We’re seeing the highest inflation in decades, coupled with rapid tightening from the Federal Reserve, coupled with a stock market and bond market crash, coupled with record housing prices, coupled with rock-bottom unemployment, coupled with supply chain constraints. Upstart’s models weren’t trained on anything like this.

When you take a model and try to apply it far outside its domain, the results are meaningless. The map isn’t the territory. A model, no matter how sophisticated, can’t fully capture reality.

Loans facilitated by Upstart during the early pandemic, when the government was hurling stimulus in all directions, have outperformed for lenders. That shouldn’t be a huge surprise.

Once that stimulus dried up, loans funded by institutions in capital markets started to underperform. That also shouldn’t be a surprise. Upstart’s models had never seen such a thing.

Can an AI-powered model do better than traditional underwriting and credit scores throughout an economic cycle? I’m skeptical. Will lending partners continue to trust Upstart to assess credit risk if underperformance spreads to those loans? And even if the models hold up, how badly will Upstart’s business be hit in a real recession?

Upstart stock crashed on Tuesday, pushing its total losses since peaking late last year above 90%. Growth is set to slow down, and profits will evaporate in the second quarter, according to the company’s guidance.

The story has changed. Upstart was supposed to be an AI-powered middleman, and now it’s holding loans on its balance sheet. That’s a big red flag and reason enough to stay away from this stock.