Shares of AMD (AMD -0.18%) climbed 29.3% in November following a positive earnings announcement, a new product announcement, and analyst upgrades. Investors are bullish about the semiconductor stock’s momentum in the data center industry, which is an enormous market that’s growing quickly.

AMD’s third-quarter earnings report impressed Wall Street, even though it cut revenue forecasts for the remainder of the year. The chipmaker is struggling with a weak global PC market, but the company still reported nearly 30% growth in the third quarter. Its data center segment is the primary catalyst for that growth, and it seems like that momentum will continue. 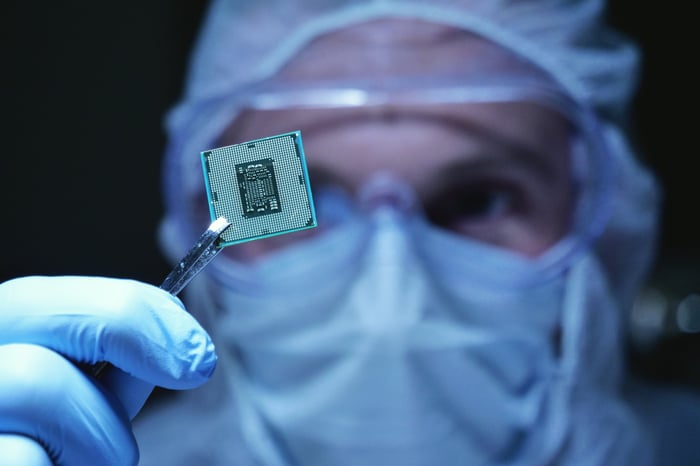 AMD’s server processor market share now stands above 27%, and it’s expected to exceed 30% next year. Numerous high-profile producers of server hardware use AMD chips, giving the semiconductor leader exposure to all of the major cloud computing leaders. That’s an enviable spot to occupy.

AMD has struggled through the first week of December, giving back a chunk of the previous month’s gains. The stock’s forward P/E ratio is currently below 19, which is an attractive level if there’s significant long-term opportunity in the data center market. That sort of valuation is more common among low-growth stocks or companies with financial health concerns, neither of which really apply to AMD. The semiconductor stock doesn’t carry meaningful debt, and Wall Street is expecting around 6% growth next year.

It won’t exactly be smooth sailing for AMD in the short term. Its PC business, which has traditionally carried the stock, is likely to suffer for at least the next few quarters as consumers pull back on big-ticket spending. Semiconductor stocks are notoriously cyclical, and demand for computer components can drop quickly as inventories build up.That leads to simultaneous declines in pricing and sales volumes, which can crush cash flows in the short term. New generations of semiconductors are developed quickly, so there’s no guarantee that market leaders will retain their position heading into the next cycle.

Valuations for established semiconductor stocks reflect the cyclicality intense competition of the industry, so they generally don’t receive the lofty valuation ratios of software companies. AMD’s forward P/E ratio might creep a bit higher, but don’t expect it to drastically increase. Instead, today’s buyers should be anticipating profit growth when the PC sector turns around to complement the growth in data center applications.