Ford Motor Company (NYSE: F) popped up about 5% higher at one point on Thursday to reach a $100 billion market cap for the first time in history. Intraday, the stock was holding much of its gains in defiance to the SPDR S&P 500 ETF Trust (NYSE: SPY) which was pulled back about 0.8%.

The stock was also reacting bullishly to a consolidation pattern Benzinga called out on Jan. 10

Ford has been on an upwards trajectory since Sept. 22, rising more than 96% since that date to reach a 52-week high of $25.87. The stock has been propelled by Ford’s quickened pace to remake its legacy brand models into electric vehicles. Tesla Inc (NASDAQ: TSLA), the leader in the EV market has comparatively risen about 43% over the same time period.

Louis Navellier of Nevada-based hedge fund Navellier & Associates said in a note on Wednesday the legacy automaker still can’t compete with Tesla. Navellier believes it comes down to Ford and other automakers who are currently dragged down by the battery shortage.

Tesla may continue to dominate the EV space for quite some time. But, as more players enter into the arena and consumers have more EV models and manufacturers to choose from, Ford may have more room to grow over the long term.

See Also: After a Blockbuster 2021, Analyst Says EV Stocks Could See Some Cooling Off This Year

The Ford Chart: On Thursday, Ford broke up from a bull flag pattern on the daily chart with the pole printed between Dec. 31 and Jan. 4 and the flag created between Jan. 5 and Wednesday. Ford created a number of bull flags on its ascent during the fourth quarter of 2021 and the patterns have been consistently recognized by the market, which indicates bullish breaks this type of pattern of Ford’s stock may continue to happen.

Ford’s relative strength index (RSI) may concern some bullish traders because it has been registering mostly above the 70% level since Jan. 3. When a stock’s RSI reaches or exceeds 70% it becomes overbought, which can be a sell signal for technical traders — although it should be noted RSI levels can stay extended for long periods of time.

There are two gaps below on Ford’s chart that may also give bullish traders pause because gaps on charts fill about 90% of the time. The closest lower gap is between $21.88 and $22.42 and the second gap falls between the $15.92 and $16.55 range. Both gaps are breakaway gaps, which makes them slightly less likely to fill in the short term.

Want direct analysis? Find me in the BZ Pro lounge! Click here for a free trial. 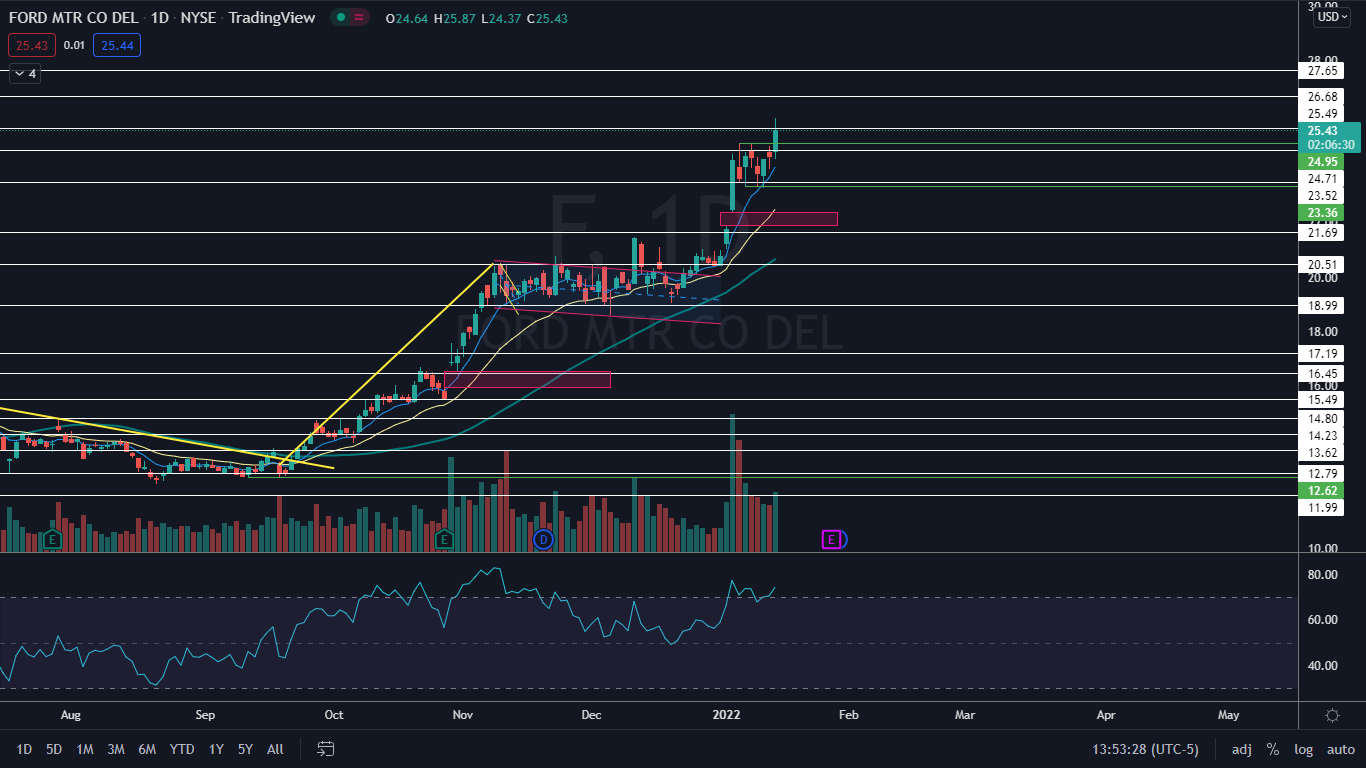 © 2022 Benzinga.com. Benzinga does not provide investment advice. All rights reserved.

Why Apple Stock Popped, Then Dropped on Thursday

Another interest rate looms, but Britain doesn’t need this one either | Phillip Inman