End of a winning week on dovish Fed bets

Europe’s Stoxx 600 index closed flat on Friday, rounding off an upbeat week that saw it surpass a three-month high and secure a sixth week of gains.

Expectations of slower Federal Reserve rate hikes and economic data suggesting that coming recessions in Germany and the wider euro zone may be shallow have cheered markets.

That was despite the negative performance of stocks such as Credit Suisse, which faces a major restructuring after several scandals.

Stocks opened little changed on Friday ahead of the short trading day as Wall Street looks to close out a winning holiday week.

The Dow Jones Industrial Average rose 19 points, or 0.09%. The S&P 500 lost 0.03% and the Nasdaq Composite slipped 0.48%, weighed down by shares of Activision Blizzard, which fell nearly 4% on news that the FTC could block Microsoft from taking over the gaming company.

Credit Suisse shares down more than 5% to all-time low

The embattled Swiss lender saw its shares continue to slide despite it securing more than $4 billion in funding from investors, including the Saudi National Bank, to shore up its financial position.

Credit Suisse is undergoing its second strategic overhaul in less than a year as it looks to address persistent underperformance in its investment bank and a string of risk management and compliance failures, which have saddled the bank with substantial litigation costs.

Investors’ fear of missing out on the upside is back, analyst says 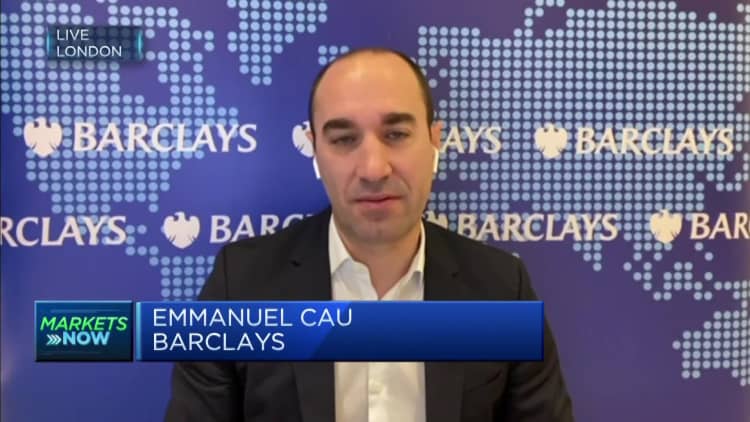 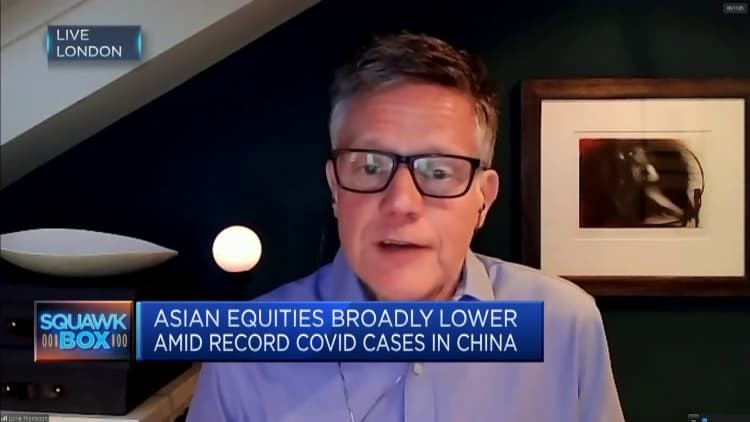 The U.K. is headed for a deeper recession than Europe and the U.S., according to Rupert Thompson, chief economist at investment firm Kingswood.

The volume of Black Friday card transactions are in line with 2021 levels, according to Barclaycard Payments data.

The data covered purchases up until 10 a.m. London time made through Barclaycard Payments, which processes £1 out of every £3 spent on debit and credit cards in the U.K.

Investors are keeping a close eye on the annual shopping extravaganza to see how inflation and cost-of-living woes are impacting consumer spending.

The gap between 2-year and 10-year government bond yields was at -27 basis points late on Thursday and -26 basis points on Friday.

Many economists view an inverted yield curve as a precursor to a recession.

There is widespread agreement among analysts that Germany is heading for a recession, though Friday’s final GDP reading for the third quarter showed 0.4% quarter-on-quarter and 1.3% annual growth, fuelling hopes that it will be shallow.

Eurozone PMI figures for November showing a moderation in the slowdown of business activity have also added to cautious optimism.

German GDP figures show the country’s economy has grown slightly more in the third quarter than anticipated on the back of consumer spending.

Europe’s largest economy grew by 0.4% compared to the second quarter and by 1.3% year on year, according to the Federal Statistics Office.

Germany is expected to fall into recession, but the data suggests it may not be as severe as first projected.

Stocks on the move: UK homebuilders down on first-time buyer survey, Rockwool up 4%

At the top of the Stoxx 600, Danish mineral wool product manufacturer Rockwool International gained 4% after Morgan Stanley raised its price target for the stock.

Here are the opening calls

The U.K. commercial property sector is in a “toxic environment” for investors, according to Plurimi Wealth’s chief investment officer.

Patrick Armstrong told CNBC’s Pro Talks that the real estate sector was “sensitive” to higher interest rates, which he thinks will lead to lower property values and share prices.

He revealed two stocks he was betting against in the sector by shorting their shares.

Patrick Armstrong, chief investment officer at Plurimi Wealth, believes margin squeeze is the ‘biggest risk’ for equities. But he thinks some stocks could beat the trend.

“Own sectors with defendable margins or that are creating margin squeeze elsewhere,” he added, naming the sectors and stocks he likes best.

CNBC Pro: UBS says recession in 2023 will be an inch deep but a mile wide — and that’s not priced into stocks

Global economic conditions will shift next year and that’s going to flip which markets and sectors underperform, according to the chief strategist of UBS Investment Bank.

“It’s an inch deep but it’s a mile wide,” he said of the expected recession. “Global growth is at 2% and that is not priced into stocks,” Bhanu Baweja told CNBC’s “Squawk Box Europe” Wednesday.

He also named which sectors he expects to outperform next year.

Inflation is coming down. Here’s what that means for annual pay raises