Dow Jones futures rose slightly overnight, along with S&P 500 futures and Nasdaq futures. The stock market rally had a volatile session Thursday, with the major indexes rebounding off lows and briefly turning higher before sinking back into the red. The Dow Jones undercut its recent lows, but the S&P 500 and Nasdaq composite have not.

Meanwhile, China EV and battery giant BYD (BYDDF) reclaimed a key level in Thursday’s trade. BYD, which by some measures is now the world’s EV sales leader, is set to launch a new model that will directly take on Tesla (TSLA) for the first time. Tesla stock edged lower.

Deere (DE) reports Friday morning. A month ago DE stock was at record highs, with many farm-related stocks and groups doing well. But shares have tumbled below their 50-day and 200-day lines.

Valaris was Thursday’s IBD Stock Of The Day. The video embedded in this article discussed the overall market rally and analyzed VAL stock, Livent and World Wrestling Entertainment (WWE).

Remember that overnight action in Dow futures and elsewhere doesn’t necessarily translate into actual trading in the next regular stock market session.

The stock market rally sold off at the open, rebounded higher, but closed modestly lower after an up-and-down session.

Valaris stock fell 1.1% to 56.50. Shares have formed an ascending base with a 61.80 buy point, according to MarketSmith analysis, holding support at the 50-day line along the way. An ascending base is especially powerful in weak markets, as a stock continues to move higher. The relative strength line has been steadily rising into new high territory.

Valaris is not profitable but that is expected to change this year. The offshore oil driller won key contracts with Saudi Aramco earlier this year.

ALB stock climbed 1.3% to 239.08. Albemarle stock is working on a consolidation with a 291.58 buy point. Investors could use 243.28 as an early entry from a too-low handle, though 248 appears to be a key resistance area. The RS line for ALB stock also is at record highs. Albemarle also delivered strong earnings and guidance earlier this week.

Livent and ALB stock rallied Thursday in part on lithium-and-fertilizer play SQM (SQM), which rallied 5.6% to 95.23 after delivering blowout 973% EPS growth. SQM stock technically moved to the top of a buy zone above a 90.97 entry, but is now 18% above its 50-day line.

Which Cathie Wood EV Giant Is The Better Buy?

BYD Goes Up Vs. Tesla 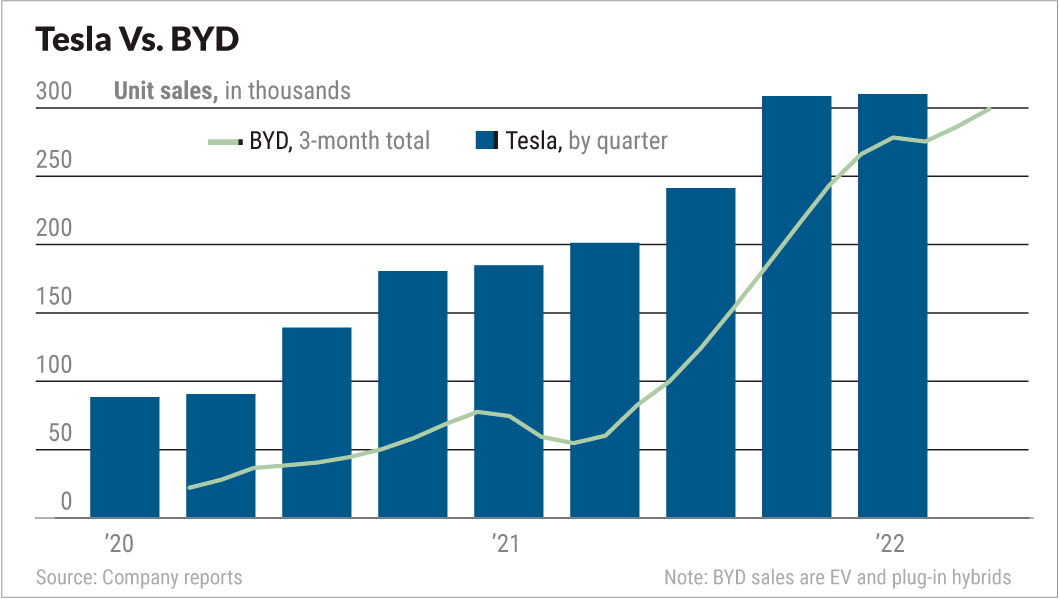 BYD, with its in-house battery and chip operations, has largely shrugged off China’s Covid shutdowns that have slammed Tesla and other automakers in China. As a result, BYD sales of EVs and plug-in hybrids will almost certainly pass Tesla’s EV-only sales this quarter. Even as Tesla production rebounds, BYD could hold the EV crown as new factories and models come online.

Still, Tesla and BYD models haven’t competed directly against each other much. That’s about to change.

On Friday, BYD will open the Seal EV sedan for preorders in China. The BYD Seal has roughly the same dimensions as a Model 3. But it boasts longer range and faster acceleration than a made-in-China Model 3 — and is expected to start at roughly $10,000 less.

And unlike many Tesla rivals, when BYD launches a new EV, it tends to quickly produce in volume.

A successful Seal launch would not only provide another boost to rapid sales growth, but could burnish BYD’s brand as it expands into new markets. It could also be a turning point for the EV industry and Tesla.

Meanwhile, reports that the Chinese government could extend EV subsidies beyond 2022 are good news for EV makers in China generally.

However, BYD stock boasts a triple-digit PE ratio and is the only notable automaker above its 50-day and 200-day lines. Highly valued lone wolf stocks have been hunted down in recent months.

After Wednesday’s brutal sell-off, the stock market rally looked like it might fail outright Thursday. The Dow Jones did undercut its May 12 low near the open, ending its short-lived rally. The S&P 500 and Nasdaq did not, so the overall stock market rally is ongoing.

But ultimately it was another down day, and the rally remains under pressure. The major indexes closing below the low of Tuesday’s follow-through day means that it’s highly likely that the rally will fail eventually.

The outperformance in Ark-type stocks Thursday suggests bottom fishing among beaten-down growth names vs. broad market strength. A more-positive interpretation is that the ARKK chart held up relatively well on Wednesday, not undercutting the prior day’s lows and holding well above its May 12 lows. The recent downtrend in Treasury yields is good news for highly valued growth stocks. Meanwhile, the inflation, supply chain and recession fears slamming much of the market aren’t as big a factor to story stocks.

Oil and gas remains a leading sector. Fertilizer makers and lithium plays such as ALB stock are potentially interesting. Some shipping names are doing well.

Northrop Grumman (NOC) and Eli Lilly (LLY), two leaders in leading groups, fell below their 50-day moving averages on Thursday. The stocks remain in bases with relative strength lines near highs, so are definitely worth watching.

But it’s a tough market environment, and investors can’t count on leading stocks to hold on, with Apple (AAPL) and Dollar Tree (DLTR) among the many examples.

What To Do Now

The stock market rally, already under pressure, is highly risky right now. It’s prone to big swings up and down as investors swing from fear to greed and back again. But the odds are high that the market rally will fail, as it already has for the Dow industrials.

The market arguably needs more time for stocks to set up. After such a fierce sell-off in April to early May, even stocks with high RS lines generally weren’t in position. Some sideways market action could be constructive for leading stocks.

Investors should keep working on watchlists and stay engaged. Market conditions could change dramatically in the coming days. Investors need to be ready.

Read The Big Picture every day to stay in sync with the market direction and leading stocks and sectors.

The 200-Day Average: The Last Line Of Support?

Stocks miss target as rally ends before getting started