Data intelligence startup Near, with 1.6B anonymized user IDs, lists on Nasdaq via SPAC a


The IPO window has all but closed for technology companies in the wake of a massive downturn in the market, but an opening still remains for some, in the form of SPACs. Near — a data intelligence company that has amassed 1.6 billion anonymized user profiles attached to 70 million locations in 44 countries — today announced that it would be listing on Nasdaq by way of a merger with KludeIn I Acquisition Corp., one of the many blank check companies that have been set up for the purposes of taking privately held companies public, at a valuation “near” $1 billion. It will trade on Nasdaq using the “NIR” ticker.

Alongside that, the company is picking up a $100 million equity investment into its business from CF Principal Investments, an affiliate of Cantor Fitzgerald.

If you’ve been following Near or the SPAC market, you might recall that there were rumors of KludeIn talking to Near back in December. At the time Near was reportedly aiming at a valuation of between $1 billion and $1.2 billion with the listing. The last several months, however, have seen the IPO market virtually shut down alongside a massive drop in technology stocks across the board and a wider downturn in tech investing overall, even in much smaller, earlier-stage startups.

Near, originally founded in Singapore in 2012 and now based out of Pasadena, had raised around $134 million in funding, including a $100 million round in 2019 — which had been the company’s last big raise.

Its investors include the likes of Sequoia India, JP Morgan, Cisco and Telstra (which have agreed to a one-year lock-up according to KludeIn’s SEC filings). Company data from PitchBook notes that Near had tried but cancelled a fundraise in May 2021.

All in all, Near is an interesting example when considering the predicament that a lot of later-stage startups might be finding themselves at the moment.

On the one hand, the company has some big customers and some potentially interesting technology, especially in light of the swing from regulators and the public toward demanding more privacy in data intelligence products overall.

It works with major brands and companies including McDonald’s, Wendy’s, Ford, the CBRE Group and 60% of the Fortune 500, which use Near’s interactive, cloud-based AI platform (branded Allspark) to tap into anonymised, location-based profiles of users based on a trove of information that Near sources and then merges from phones, data partners, carriers and its customers. It claims the database has been built “with privacy by design.”

It describes its approach as “stitching” and says that it’s patent-protected, giving it a kind of moat against other competitors, and potentially some value as an asset for others that are building big data businesses and need more privacy-based approaches.

On the other hand, while financials detailed in KludeIn’s SEC filings show growth, it is at a very modest pace — numbers may not look that great to investors especially in the current climate. In 2020, Near posted revenues of $33 million, with estimated revenues of $46 million for 2021, $63 million for 2022 and $91 million for 2023. The company estimates that its gross profit margin for this year will be 72% ($44 million) but equally estimates that EBITDA has been negative and will continue to be until at least 2024. 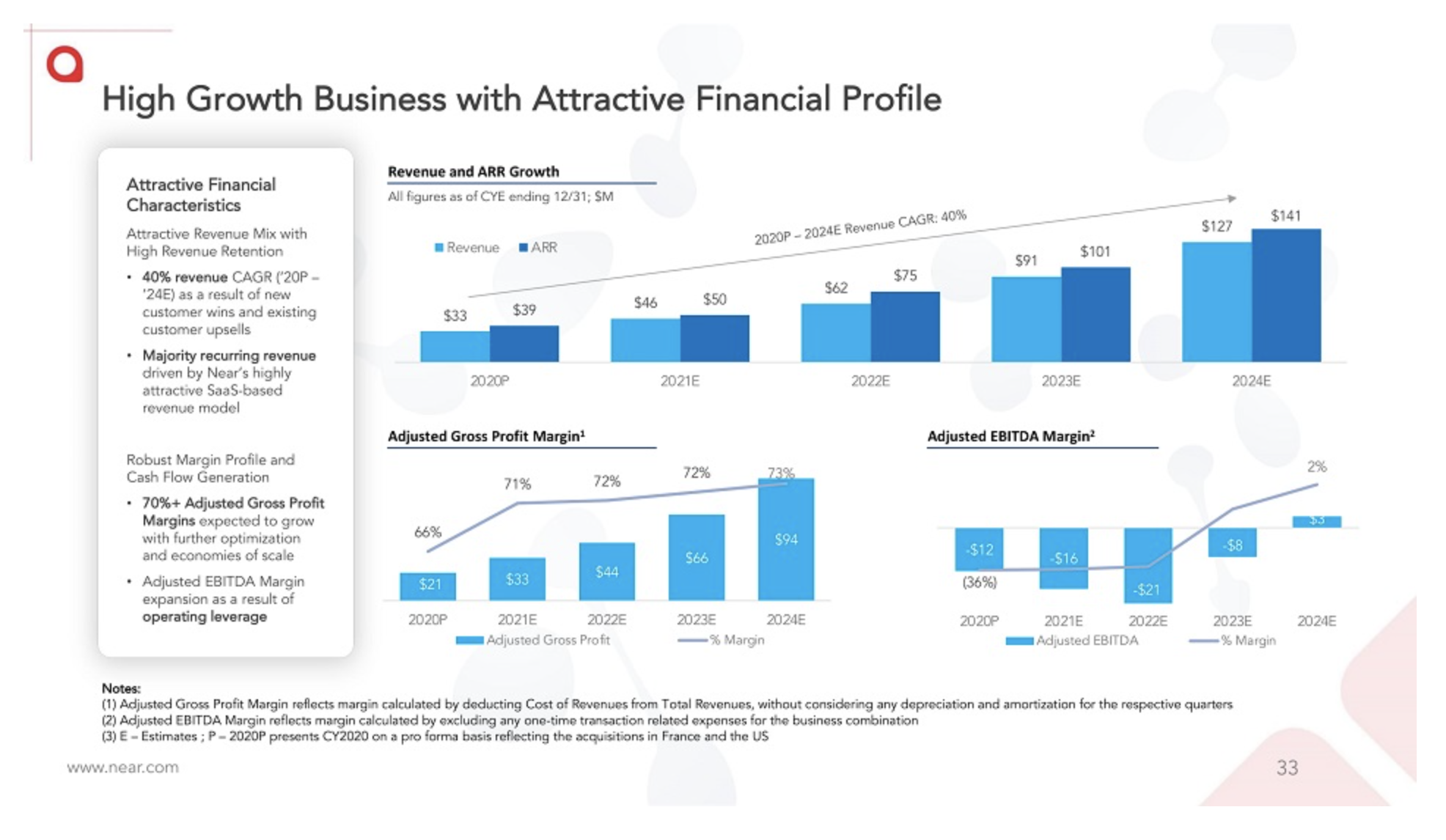 Looking out further than Near, it will be interesting to see how many others follow the company in taking the SPAC exit route, which has proven to be a controversial vehicle overall.

On the plus side, SPACs are lauded by supporters for being a faster, more efficient route for strong startups to enter the public markets and thus raise money from more investors (and giving sight of an exit to private investors): this is very much the position Near and KludeIn are taking.

“Enterprises around the world have trusted Near to answer their critical questions that help drive and grow their business for more than a decade. The market demand for data around human movement and consumer behavior to understand changing markets and consumers is growing exponentially and now is the time to accelerate the penetration of the large and untapped $23 billion TAM,” Anil Mathews, founder and CEO of Near, said in a statement. “Going public provides us the credibility and currency to double-down on growth and to continue executing on our winning flywheel for enhanced business outcomes over the next decade.”

“I am thrilled to partner with Anil and the entire team at Near as they continue to help global enterprises better understand consumer behavior and derive actionable intelligence from their global, full-stack data intelligence platform,” added Narayan Ramachandran, the chairman and CEO of KludeIn. “We believe this merger is highly compelling based on the diversified global customer base, superior SaaS flywheel and network effects of Near’s business, highlighted by the company’s strong customer net retention.”

On the minus side, those positives are also the very reasons for some of SPAC’s problems: Simply put, they have enabled public listings for companies that might have found it much harder, if not impossible, to do so through the scrutiny of more traditional channels. Sometimes that has played out okay anyway, but sometimes it has ended badly for everyone. Just this week, Enjoy — which also listed by way of a SPAC — said that it was on course to run out of money by June and was reviewing its strategic options.

Time, the appetite for more data intelligence and potentially some factors out of its control like the investment climate, ultimately will show which way Near will go. The transaction is expected to generate $268 million of gross proceeds, assuming there are no redemptions and a successful private placement of $95 million of KludeIn common stock, KludeIn said.

Read More: Data intelligence startup Near, with 1.6B anonymized user IDs, lists on Nasdaq via SPAC a