3 Stocks That Could Soon Split Other Than Amazon


Have you heard the news? Amazon is doing a 20-for-1 split on its nearly $3,000 stock. While having 20 shares at $150 is the same as one share at $3,000 of the same company, the headline nevertheless has captured investor attention.

In other words, don’t invest in Amazon just because the stock is splitting. Same goes for Alphabet and its 20-for-1 stock split later this summer. Three other stocks that might follow suit one day soon are ASML Holding (NASDAQ:ASML), Broadcom (NASDAQ:AVGO), and SVB Financial Group (NASDAQ:SIVB). Split or no split, here’s why three Fool.com contributors think each is a buy. Semiconductor equipment stocks are down even with surging demand

Billy Duberstein (ASML Holding): Dutch semiconductor equipment company ASML Holding is a candidate for a future stock split, with a share price around $600 today. And that price was even higher last summer, reaching an all-time high of $895 in September.

The 33% fall for ASML does seem a bit overdone, especially since we are still in a semiconductor shortage. To alleviate shortages, foundries will have to buy more of the machines that ASML supplies to produce more chips. It appears that high inflation, supply chain issues, and geopolitical conflict have led some to fear disruption in this year’s sales or even a recession. Historically in recessions, semiconductor sales typically fall, so it appears investors are selling off high-quality semi stocks like ASML these days first and asking questions later.

Yet given today’s unique environment, the sell-off in semiconductor equipment stocks doesn’t make a lot of sense. By all indications, current demand is outstripping available supply, and most equipment companies have already pre-booked sales for the year as global chip foundries have announced huge multi-year spending plans. Prior recessions showed that semiconductor crashes came in economic downturns; however, we are in an inflationary environment now more like the 1970s, before the modern semiconductor industry took its current form.

Given the increased digitization coming out of the pandemic, the strategic nature of advanced chips today, and the increasing capital intensity to produce leading-edge chips, I don’t expect a downturn in semicap equipment demand this year. In fact, research company IC Insights just projected 20% growth in global foundry output this year, after a 26% rise last year. The company also sees no “down years” for the next five years at least.

Several of ASML’s peers have corroborated IC Insight’s projections, saying they expect front-end semiconductor equipment to reach $100 billion this year, up from the mid-$80 billion range last year, which was a record. Yes, some equipment companies have reported supply shortages recently, leading to some underwhelming guidance this quarter, but those sales are booked and will eventually be made later this year. Again, it’s a supply problem, not a demand problem.

Meanwhile, ASML has a monopoly on extreme ultraviolet lithography (EUV), the technology essential in making leading-edge chips. If inflation sticks around for a longer period than some think, that competitive position should give ASML pricing power for its machines. Meanwhile, unlike some other high-flying tech stocks, ASML generates cash flow today and continues to repurchase its own stock, taking advantage of this six-month swoon in the share price.

While it’s impossible to call a bottom, ASML should do well over the long term, given its competitive strengths in the most advanced semiconductor production. So those with an eye on the future beyond this tumultuous period should look to ASML today. And if the stock splits at some point, so much the better.

It’s time to give Broadcom a trim

Anders Bylund (Broadcom): Semiconductor giant Broadcom could be next in line for a splashy stock split.

The fabless designer of networking and communication chips has delivered stellar shareholder returns in the last decade. Broadcom’s stock gained more than 1,500% over that period, far ahead of the semiconductor market’s overall gains and even further in front of the S&P 500 market index: 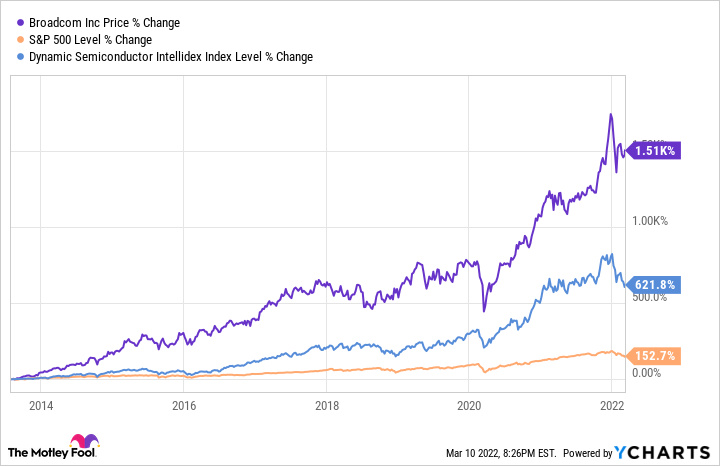 At the end of that fantastic chart, you’ll find Broadcom trading at nearly $590 per share. That’s the 15th-highest stock price among the 504 constituents of the S&P 500, poised to climb at least three spots when Amazon and Alphabet execute their splits.

Now, stock splits don’t really do anything important anymore. Once upon a time, investors needed to cover the full price of at least one share before buying into a stock. Thanks to the rise of fractional shares, that’s no longer the case. Many brokerages will gladly let you buy one-fifth of a Broadcom share if you only have roughly $100 to invest.

However, many investors are still more comfortable with trading full shares and a handful of brokers haven’t jumped aboard the fractional shares bandwagon quite yet. So there’s still a place for stock splits, and Broadcom’s share prices have reached a level where a modest haircut might make sense. The stock is a solid buy with or without a stock split, by the way. It’s not easy to find stocks pairing rampant growth with a generous dividend, but Broadcom delivers on both counts.

The company has not performed any stock splits since the predecessor company named Avago entered the public market in 2009. After all these years of market-beating gains, it’s just high time to trim that hefty price tag a bit. So I wouldn’t be surprised to see Broadcom announce a stock split someday soon, on the order of 5-for-1 or perhaps 10-for-1.

An old bank making lots of hay on emerging tech

Nicholas Rossolillo (SVB Financial): After a nearly 120% return since the start of 2020 (which includes a recent 30% sell-off from all-time highs), SVB Financial stock trades for well over $500 per share. Perhaps a stock split could be in order.

But let’s talk about the nitty-gritty. How in the world did a bank stock — especially a “traditional” banking stock that isn’t betting big on apps and other hot fintech service trends of the moment — more than double during the pandemic era?

It’s true that SVB Financial (or Silicon Valley Bank, one of the company’s subsidiaries) has a more traditional banking business model. It earns interest income from client deposits, it earns banking fees, and it lends money. But it’s the client base it serves that really differentiates this company.

SVB caters to what it calls “the innovation economy,” disruptive start-up companies using technology to shake up the global status quo. SVB’s services are tuned to the unique needs of these small and fast-moving businesses, as well as start-up founders and key employees, and the venture capital firms that invest in these start-ups. SVB itself often gets an equity stake in private companies as part of banking deals.

And that’s why this bank exploded higher the last two years. A record-setting pace of tech initial public offerings sent investment gains and investment banking fees soaring in 2020 and 2021. And as these clients enjoy success as the “innovation economy” expands, it means more deposits for SVB to earn interest on. Interest income is expected to rise in the high 30% range in the next year compared to 2021 levels, and investment banking revenue should also increase at about a mid-teens percentage rate.

This is no sleepy banking institution. SVB’s products and services help enable start-ups and their early investors to do great things, and it’s benefiting alongside them. Shares currently trade for 17 times this year’s expected earnings per share. If you believe tech disruption will continue for the foreseeable future, this looks like a great long-term bargain on a banking specialist.


Read More: 3 Stocks That Could Soon Split Other Than Amazon